Can we reform our prison system?

3. 4 times as many mentally ill people are in prisons as are in mental health hospitals.

4. On average, 2 out of every 3 released prisoners will be re-arrested and 1 in 2 will return to prison within 3 years of release.

5. Over the past 20 years, inflation-adjusted state spending on corrections rose 127% while higher education expenditures rose just 21%.

8. Nearly 60% of the people in state prisons serving time for a drug offense had no history of violence or of any significant selling activity.

9. Black males have a 32% chance of serving time in prison at some point in their lives.

That, my friends, is a sorry state of affairs and pretty accurately describes what passes for a so-called criminal justice system in our country. Over the last 30 years, this mess has gotten totally out of control because of our war on drugs, get tough on crime, zero tolerance, three strikes policies - all with a great big dose of racism thrown in to the mix. As Senator Jim Webb says in a current article in Parade Magazine:

With so many of our citizens in prison compared with the rest of the world, there are only two possibilities: Either we are home to the most evil people on earth or we are doing something different--and vastly counterproductive. Obviously, the answer is the latter.

Senator Web has introduced legislation that would establish a commission to study this problem and make recommendations on how to fix it. You can read the bill and more about all of this at his website - which is where the above statistics came from.

While there are parts of what he wants to do that I'm not thrilled about (he also focused a fair amount of attention on foreign gang activity, which is likely to stir up yet more paranoia about our borders and immigration), I am really hoping that he can engage us in a national dialogue to take an honest look at this mess. We've known for years that what we're doing isn't working, and in fact, is probably making matters worse. And yet, anyone who tries to do something about it is immediately labelled "soft on crime." I hope we're ready as a country to change that narrative.

But there are other forces at work on this issue. I have mentioned before that the Children's Defense Fund has launched a Cradle to Prison Pipeline Campaign designed to address the nexus of poverty and race that have been documented to fuel this problem. On their website, they have a wonderful layout of Key Immediate Action Steps that individuals, families, communities, organizations, and the government can take right now to begin to dismantle the pipeline.

Many of you have probably heard about The Sentencing Project and their heroic work on death penalty cases. They also have collected resources and advocated on the issues of sentencing reform, racial disparity, felony disenfranchisement, and the special concerns of women in incarceration.

The Equal Justice Initiative is where I read a report on the fact that we're the only country in the world that voted against a UN resolution calling for the abolition of sentencing children as young as 13 to life in prison - and that's because their report documented 73 such cases in the US. But they also have initiatives on the death penalty, race and poverty, and prison/sentencing reform.

On a local level, the organization I work for has just taken a major step this week to do our part. Partly as a result of what I learned from my interest in the Obama campaign, this week we hired a community organizer. This means that for the first time in our agency's 35 year history, we will take a step beyond trying to help the individual youth and families affected by all of this and go out into our community to rally support for systemic changes. We have been lucky enough to hire a young African American man for this position who has experience with the system and a tremendous passion personally for the kind of changes that need to happen. Its likely to take at least 6 months or so to really get much underway with this new project. But I imagine that I'll be wanting to write about our successes and challenges in the future.

So, can we do this? Can we reform our prison system? These are just a few examples of people/organizations that are attempting to do so. The consistency of issues that have been identified as contributors to the problem seem to make a pretty strong case for what needs to be done. Seems to me that the only thing missing is to get folks engaged in making it happen.

Years ago I was a member of a commission looking at these issues in our state. The man who then served as our Commissioner of Corrections said something that seemed to capture the mindset that needs to change in order for us to finally be able to right this wrong. He said: "We need to clarify who we're mad at and who we're afraid of." That was his rather crude way of saying that we should reserve incarceration for the later.
at March 28, 2009 No comments:

I've always been terrible at science - something I blame on my 10th grade biology teacher (that's a whole long boring story). But recently I've been pretty intrigued by what we're learning about how the brain works. It could be that I have just enough knowledge to be dangerous because I pretty much stick to layman's interpretations of this information rather than digging in to the actual science. But I'm more interested in the overview anyway.

The whole distinction between how our left and right brains work is the part that has most fascinated me. From the amazing speech that Dr. Jill Bolte Taylor (video link) gave at a TED conference as well as other sources, I've learned that the right brain is responsible for taking in all of the stimuli that we gather from our senses. And the left brain is responsible for sorting and naming so that we can make sense of it all.

The tricky part is that our senses and our right brains take in way more stimuli than we can sort. So the left brain has to develop some short-cuts to help us with that. One of the ways it does this is by sorting things into patterns that it has seen before. These short-cuts are what I'm calling "invisible thinking." Our brains place incoming stimuli into previously developed patterns so that we don't have to spend so much time analyzing and sorting through the myriads of data that we take in. Of course, the problem with this is that when we want to change our invisible thinking, that can be difficult to do unless we examine the patterns we've incorporated.

Some of this sorting process is what's at work with visual stimuli when we talk about the whole field of optical illusions. If you want to have some fun, visit this site, which has 81 different illusions to play with. There's even one that results in an approaching Buddha.

This is one of the most famous illusions. What do you see?

Is it a duck or a rabbit? If you're like me, one of these options is clear at first and it takes work to see the other one.

While researching all of this, I came across the art work of Octavio Ocampo. He not only captures the illusions, he does so with beauty and message as well. 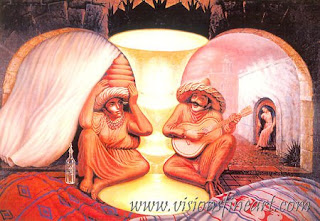 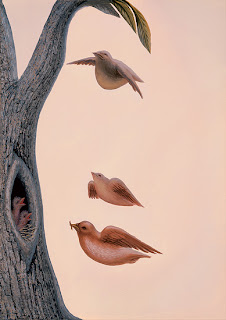 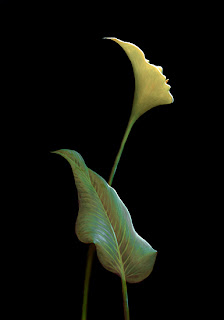 What this art so beautifully demonstrates is that what we think we see at first is not all that's there. Our invisible thinking, or what we do at first glance, can leave out so much that is available to see and know. It takes time and work to get beyond our invisible thinking; something that's often not possible in our fast-paced world. But taking a second look at things is so often worth the effort.
at March 07, 2009 No comments: