President Obama has often lamented the bubble that tends to surround him in the White House. He does lots of things - both rewarding and painful - to keep in touch with the lives of people he went there to fight for...like reading letters from ordinary Americans every night and visiting privately with the families of the children lost in Newtown.

But when getting something done is especially important to him - he takes all that one more step. Remember Natoma Canfield? 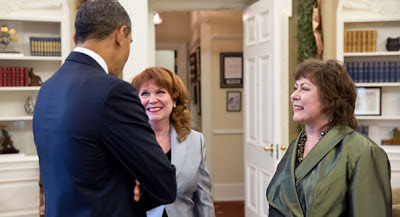 That's her on the right meeting with the President this past December. In 2010 she wrote him a letter about losing her health insurance during her battle with cancer. After the Supreme Court ruled on Obamacare, President Obama said he had carried her letter with him every day during the fight over health care reform. Now it hangs on a wall in the West Wing.

Yesterday at the end of his remarks about gun violence, President Obama said this:

When I visited Newtown last month, I spent some private time with many of the families who lost their children that day. And one was the family of Grace McDonald. Grace’s parents are here. Grace was seven years old when she was struck down -- just a gorgeous, caring, joyful little girl. I’m told she loved pink. She loved the beach. She dreamed of becoming a painter.

And so just before I left, Chris, her father, gave me one of her paintings, and I hung it in my private study just off the Oval Office. And every time I look at that painting, I think about Grace. And I think about the life that she lived and the life that lay ahead of her, and most of all, I think about how, when it comes to protecting the most vulnerable among us, we must act now -- for Grace. For the 25 other innocent children and devoted educators who had so much left to give. For the men and women in big cities and small towns who fall victim to senseless violence each and every day. For all the Americans who are counting on us to keep them safe from harm. Let’s do the right thing. Let’s do the right thing for them, and for this country that we love so much.

In this battle, it will be Grace who will be helping him keep it real. 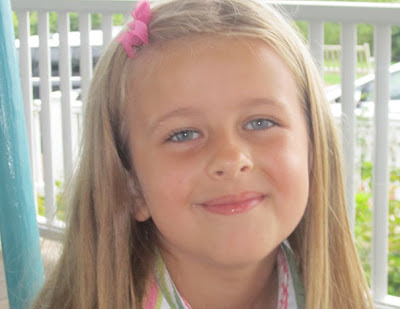 I'd suggest we all join him in remembering Grace - and all the others who've been lost. Now is the time.
at January 17, 2013