Early Signs of Another Win for Obamacare

New research from the Commonwealth Fund:


Conducted from July to December 2014, for the first time since it began in 2001, the survey finds declines in the number of people who report cost-related access problems and medical-related financial difficulties...The number of adults who reported problems paying their medical bills declined from an estimated 75 million people in 2012 to 64 million people in 2014. 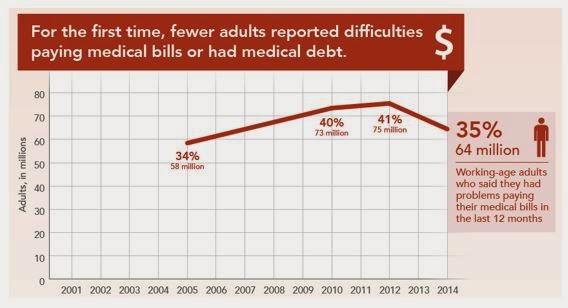 One of the reasons for the urgency in passing health care reform was that the number one reason why Americans have been going bankrupt is not because of credit cards or unpaid mortgages...its medical bills. This often happened as those who were insured reached their annual and/or lifetime caps on coverage but still needed ongoing treatment. Obamacare did away with those caps on essential services.

It's still too early to tell if Obamacare will reduce the number of medical bankruptcies. But the results in Massachusetts - where similar health care reform was initiated in 2006 - are promising.


We find that the reform significantly improved credit scores, reduced the total amount past due, reduced the fraction of debt past due, and reduced the probability of personal bankruptcy. We find particularly pronounced reductions in the probability of having a large delinquency of over $5,000. These effects tend to be larger among individuals whose credit scores were low at the time of the reform, suggesting that the greatest gains in financial security occurred among those who were already struggling financially.

The Commonwealth Fund research on Obamacare indicates we're on our way.
at January 15, 2015