For Democrats who are hoping that an alternative to Hillary Clinton will emerge from Iowa, the results of the latest Bloomberg Politics/Des Moines Register poll of likely caucus-goers doesn't bode well. 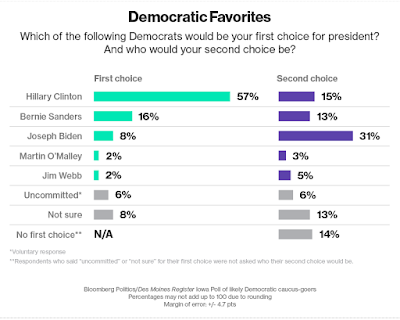 People will suggest that this poll was conducted prior to O'Malley's announcement this weekend. And they have a point. He'll likely move up in the polls now that he is an actual candidate. But he's been spending an awful lot of time in Iowa and is still being beaten by VP Joe Biden - who hasn't even tipped his hand about whether or not he's going to run.

Sen. Bernie Sanders is running on the issues that have always made him popular with the anti-establishment left. He's doing a bit better than he might have in the past because Sen. Elizabeth Warren has energized that wing of the Democratic Party lately and he's capitalized on that.

But so far, former Gov. O'Malley has made a political error in thinking that he can vie with Sen. Sanders for the support of that wing of the party. Here's a sample of that from his speech on Saturday. Speaking of the "privileged and the powerful," he said:


We need to prosecute cheats, we need to reinstate Glass-Steagall, and if a bank is too big to fail without wrecking our nation’s economy…then it needs to be broken up before it breaks us…again.

Goldman Sachs is one of the biggest repeat-offending investment banks in America. Recently, the CEO of Goldman Sachs let his employees know that he’d be just fine with either Bush or Clinton.

I bet he would…

Well, I’ve got news for the bullies of Wall Street —

The presidency is not a crown to be passed back and forth by you between two royal families.

As J. Ann Selzer, president of the company who conducted this Iowa poll said, "There's this anti-Hillary vote. It just isn't very big." O'Malley seems to think that there's some value in splitting that vote with Sanders, which frankly, only helps Clinton. For a guy whose reputation has been built on being "data-driven," that's hard to understand.

I suspect that what has led O'Malley to this strategy is all the talk that has been generated about the "populist" movement in the Democratic Party that started back when Elizabeth Warren and Bill De Blasio won their elections. A lot of ink has been used up by political pundits claiming that it signaled the future of the party.

What a lot of those pundits missed is that the coalition that elected President Obama...twice...is actually the future of the Democratic Party. Mayor De Blasio's huge win in NYC was as much about his promise to end "stop and frisk" for young men of color as it was about his populist economic agenda.

So far, Hillary Clinton seems to be the only candidate in the race that recognizes the importance of the Obama coalition. But in 2008 they rejected her candidacy in favor of Obama and still might be up for grabs if someone would notice. Absent that, Clinton's appeal to establishment Democrats combined with her outreach to the Obama coalition will likely make her unbeatable.
at June 01, 2015