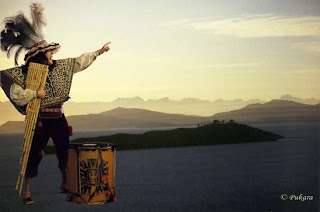 From the heart of South America, on this 12th day of October, 2007, the delegates of the indigenous first nations and peoples of the world, meeting in the World Encounter “For the Historic Victory of the Indigenous Peoples of the World”, to celebrate the adoption of the United Nations Declaration on the Rights of Indigenous Peoples, hereby declare:

That, after 515 years of oppression and domination, here we stand; they have been unable to eliminate us. We have confronted and resisted the policies of ethnocide, genocide, colonization, destruction and plunder. The imposition of such economic systems as capitalism, characterized by interventionism, wars and socio-environmental disasters, a system that continues to threaten our ways of life as peoples.
...
That a new era is beginning, promoted by the original indigenous peoples, and bringing again times of change, times of Pachakuti, in the times of the culmination of the Quinto Sol.
...
Accordingly, the Indigenous Peoples and Nations of the world demand that the States fulfill the following mandates:

1. To construct a world based on the Culture of Life, in the identity, philosophy, world view and age-old spirituality of the original indigenous peoples, applying the aboriginal knowledge and skills, strengthening the processes of interchange and brotherhood among the nations and respecting self-determination.

2. To make national and international decisions to save Mother Nature from the disasters that are being brought about by capitalism in its decline, as manifested in global warming and the ecological crisis; reaffirming that the original indigenous culture is the only alternative means of saving our planet earth.

3. To replace the present models of development based on capitalism, commodities, the irrational exploitation of humanity and natural resources, the squandering of energy, and consumerism, with models that establish life, complementarity, reciprocity, respect for cultural diversity and the sustainable use of natural resources as the principal priorities.

4. To implement national policies governing Food Sovereignty as a principal basis of National Sovereignty, in which the community guarantees respect for its own culture as appropriate spaces and modes of production, distribution and consumption consistent with the nature of healthy pollutant-free foods for the entire population, eliminating hunger, because food is a right to life.

5. To repudiate schemes and projects for the generation of energy such as biofuel, which destroy and deny food to the peoples. Likewise, we condemn the use of transgenic seeds because it replaces our ancient seeding process and makes us dependent on agro-industry.

6. To recognize and re-evaluate the role of the original indigenous woman as the vanguard of the emancipatory struggles of our peoples in accordance with the principles of duality, equality and equity of relationships between men and women.

7. To adopt the Culture of Peace and Life as a guide for resolving the world’s problems and conflicts, renouncing the arms race, and to initiate disarmament in order to guarantee the preservation of life on this planet.

9. To guarantee respect for and the right to life, health and bilingual intercultural education, incorporating policies of benefit to the indigenous first nations and peoples.

10. To declare water to be a human right, a vital element and social property of humanity and not a source of profit. Likewise, to encourage the use of alternative energies that do not threaten the life of the planet, thereby guaranteeing access to all basic services.

11. To solve cases of migration between countries in a mutually responsible way, adopting policies of free circulations of persons in order to guarantee a world without borders in which there is no discrimination, marginalization and exclusion.

12. To decolonize the United Nations, and move its headquarters to a territory that dignifies and expresses the just aspirations of the Peoples, Nations and States of the world.

13. Not to criminalize the struggles of the indigenous peoples, or demonize or accuse us of terrorism when we reclaim our rights and advance our ideas on how to save life and humanity.

14. To release immediately the indigenous leaders imprisoned in various parts of the world, and in the first place Leonard Peltier in the United States.

The struggle is unceasing, we will continue our resistance until our time comes. We proclaim the 12th of October the “day of commencement of our struggles to save Mother Nature”.

From our families, homes, communities, peoples, whether in government or without, we ourselves are determining and directing our destinies, we ourselves are assuming the will and responsibility to live well that has been bequeathed to us by our ancestors, to expand, from the simplest and least complicated to the greatest and most complex, to construct horizontally and mutually, each and every one, the culture of patience, the culture of dialogue and fundamentally the Culture of Life.