The Wiphala are the flags of the Andean First Nation's people. Each variation represents a different territory, or Suyu. 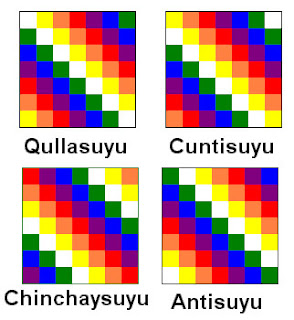 I found this description on the website The Aboriginal Andean Nations Council, CANO (or Consejo Andino de Naciones Originarias):

Each color owns a meaning. The Wiphala is not only a flag, but also the representation of the Lunar-Solar calendar of the Andean First Nations.

The Wiphala, present in every community event and ceremony, identifies the communitarian system of the Andes, based on equality, equity, harmony , solidarity and reciprocity.

Moreover, it is a symbol of the First Nations’ resistance, its use having been illegalized by the Republics, but nowadays it is floating in the wind like never before in the Andean First Nations Territory. It is another manifestation of the Pachakuti Era, the return to the Earth without evil. 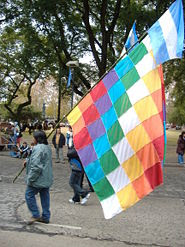 So, the next time you see a news story about something going on in the Andean countries of Peru, Bolivia, Ecuador, Agentina, Chile, or Columbia (what was once the Inca Empire), look for this flag and know that it represents people working for the Pachakuti Era:


In the early 1990's, tribal elders and shamans from the Andes began to share traditional teachings and healing practices that they had held secret since the Conquest. According to their legends, we are now in the Pachakuti Era, when Eagle and Condor will reunite and fly in the same sky. Eagle symbolizes North American culture, material progress, physical mastery, and the body; Condor symbolizes South America, Earth-based spirituality, and the heart.

From Confessions of an Economic Hit Man (page 209) by John Perkins:

Nearly every culture I know prophesies that in the late 1990's we entered a period of remarkable transition. At monasteries in the Himalayas, ceremonial sites in Indonesia, and indigenous reservations in North America, from the depths of the Amazon to the peaks of the Andes, and into the ancient Mayan cities of Central America, I have heard that ours is a special moment in human history...

The titles and the words of the prophecies differ slightly. They tell variously of a New Age, the Third Millennium, the Age of Aquarius, the Beginning of the Fifth Sun, or the end of old calendars and the commencement of new ones. Despite the varying terminologies, however, they have a great deal in common, and “The Prophecy of the Condor and Eagle” is typical. It states that back in the mists of history, human societies divided and took different paths: that of the condor (representing the heart, intuitive and mystical) and that of the eagle (representing the brain, rational and material). In the 1490's, the prophesy said, the two paths would converge and the eagle would drive the condor to the verge of extinction. Then, five hundred years later, in the 1990's a new epoch would begin, one in which the condor and the eagle will have the opportunity to reunite and fly together in the same sky, along the same path. If the condor and eagle accept this opportunity, they will create a most remarkable offspring, unlike any seen before. 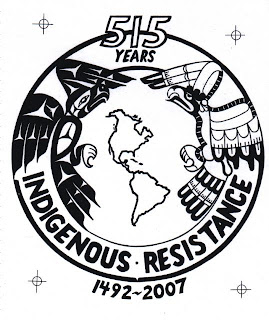 And finally, here's a short film with the same message. From the youtube descrition:

'Hope' is shaped around the knowledge and ideas of Willy Whitefeather, a man in his sixties of Cherokee ancestry, a fascinating storyteller, healer, survivalist and an individual of wisdom and heart. Using traditions and stories from Native American and world cultures, the film combines dreams, images and reminiscences from our collective memory to send a message of hope for the future. Now is the time to reconnect with Spirit, to recognize the effects of our actions, to evaluate the underlying causes of suffering and to reshape our life and our world into a harmonious one.