You cannot stop the coming of spring 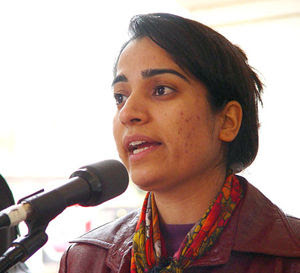 Malalai Joya has been called "the bravest woman in Afghanistan" by many in the media. When you hear her story and read her words, you'll know why.

Born in Afghanistan in 1978, Joya's family flew to the refugee camps in Iran and Pakistan in 1982 during the Soviet invasion. When she was 20 years old, her family returned to Afghanistan, where she became a vocal opponent of the Taliban and worked to establish an orphanage and health clinic.

In 2003, Joya was elected delegate to the Loya Jirga convened to ratify the Afghan Constitution, where she spoke out publicly against the involvement of warlords and was summarily dismissed.

When her time came to make her 3-minute statement, she tugged her black headscarf over her hair, stepped up to the microphone, and with emotional electricity made the speech that would alter her life.

After she spoke, there was a moment of stunned silence. Then there was an uproar. Male mujahideen, some who literally had guns at their feet, rushed towards her, shouting. She was brought under the protection of UN security forces.

In a nation where few dare to say the word "warlord" aloud, Joya had spoken fiercely against a proposal to appoint high clergy members and fundamentalist leaders to guide planning groups. She objected that several of those religious leaders were war criminals who should be tried for their actions—not national heroes to influence the new government.

Despite the commands of Assembly Chairman, Joya refused to apologize.

Since then, she has survived four assassination attempts, and travels in Afghanistan under a burqa and with armed guards.

But all that didn't stop Ms. Joya. In September 2005, she was elected to the 249-seat National Assembly, or Wolesi Jirga, as a representative of Farah Province, winning the second highest number of votes in the province.

On May 7, 2006, Malalai Joya was physically and verbally attacked by fellow members of parliament after accusing several colleagues of being "warlords" and unfit for service in the new Afghan government. After shouting death threats, fellow lawmakers suspended her for three years.

Joya explains her views of the Afghan government and the role of the US in its corruption in an email interview with the PBS show NOW:

It seems that the U.S. government and its allies want to rely on them (the warlords) and install them to the most important posts in the executive, legislation and judicial bodies. Today the whole country is in their hands and they can do anything using their power, money and guns. They grab billions of dollars from foreign aid, drugs and precious stones smuggling.

The U.S. wants a group or band in Afghanistan to obey its directions accurately and act according to the U.S. policies, and these fundamentalists’ bands of the Northern Alliance have proved throughout their life that they are ready to sacrifice Afghanistan’s national interests for their lust for power and money. The U.S. has no interest in the prosperity of our people as long as its regional and strategic interests are met.

Parliament is just a showpiece for the West to say that there is democracy in Afghanistan, but our people don’t need this donated B52 democracy. I am very fed up with the parliament and have no hope for it to do anything for our people. It is a parliament of killers, murderer, drug-lords and traitors to the motherland.

In 2006, Danish filmaker Eva Mulvad made a documentary film titled Enemies of Happiness that chronicled Joya's campaign in the country’s first democratic parliamentary elections in 35 years. Here's a short clip from the movie. Remember that at the time of the first scene, Joya is 25 years old.

Listen to the voice of this beautiful brave young woman and take heart from her courage:

Never again will I whisper in the shadows of intimidation. I am but a symbol of my people's struggle and a servant to their cause. And if I were to be killed for what I believe in, then let my blood be the beacon for emancipation and my words a revolutionary paradigm for generations to come.

They will kill me but they will not kill my voice, because it will be the voice of all Afghan women. You can cut the flower, but you cannot stop the coming of spring.