Its Easter today and spring came this week - or so says the calendar. I'm not a Christian, so I'm not celebrating Easter. But I do love the messages associated with this time of year... renewal, rebirth, light from darkness. 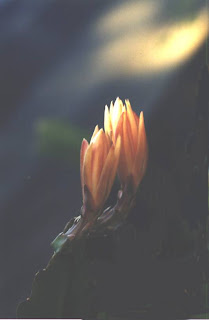 This last week has felt confusing to me as we observed the fifth anniversary of the invasion and occupation of Iraq followed almost immediately by the advent of spring. It felt like the darkest of nights was pressed too close for comfort against the possibilities of a new day. Emotionally I haven't been able to move that fast. And just to underscore the point, we've gotten 5-6 inches of snow where I live in the last two days. Indeed old man winter is fighting to give way to the coming of spring.

For many of us this winter has been a long one. And I'm not just talking about the weather. The worst of it started 7 and a half years ago when the Supreme Court declared George Bush to be president. That was all followed closely by 9/11, Afghanistan, then Iraq. And things have just grown darker since then.

There are times I play with fantasy and wonder what might have happened differently. What if we had a leader that responded to 9/11 as we would have wanted her to? How would we have scripted something different? I know many felt that moment right after the event when, in all the shock and grief, it seemed as if the whole world came together and was ready to help with the healing. But we all know that moment was squandered by those who took us to war and told us to go shopping.

Is renewal still possible after those fatal errors? There are certainly some wounds that will take more than a lifetime to heal. And we need to honor those wounds in our lives and memories with the respect they deserve.

But the capacity of the human spirit is an amazing thing. I was just reminded of that when RUKind posted a link in a comment to Nightprowlkitty's essay Friday about the film Beyond Belief.


Susan Retik and Patti Quigley are two ordinary soccer moms living in the affluent suburbs of Boston until tragedy strikes. Rather than turning inwards, grief compels these women to focus on the country where the terrorists who took their husbands' lives were trained: Afghanistan.

Over the course of two years, as they cope with loss and struggle to raise their families as single mothers, these extraordinary women dedicate themselves to empowering Afghan widows whose lives have been ravaged by decades of war, poverty and oppression - factors they consider to be the root causes of terrorism. As Susan and Patti make the courageous journey from their comfortable neighborhoods to the most desperate Afghan villages, they discover a powerful bond with each other, an unlikely kinship with widows halfway around the world, and a profound way to move beyond tragedy.

From the ruins of the World Trade Center to those of Kabul and back, theirs is a journey of personal strength and international reconciliation, and a testament to the vision that peace can be forged... one woman at a time.

Here again are the words from the trailer:

Beyond tragedy
there is hope.
Beyond hatred
there is compassion.
Beyond our borders
two women discover we are all connected.
Beyond belief.

But it's not "beyond belief." These are two real women who are acting in the real world. They are demonstrating for all of us what the true spirit of renewal can be...even in the wake of terrible tragedy. What if their way of responding was the expected course? This is not outside the bounds of what the human spirit is capable of. Certainly it is the more difficult path. Much easier to feed into hate, revenge and violence (in word and deed). But if we ever needed an example of the folly of that way, we've seen it demonstrated clearly over the last few years.

So today, on this spring day, I want to claim the path of renewal as demonstrated by Susan Retik and Patti Quigley for myself... and someday for my country.
at March 22, 2008