No, I'm not going to talk about the "end times" or Armageddon. Although, after years spent in fundamentalist churches, that is what the word "revelation" conjures up for me most days.

I'd like to talk about the process of revelation as we grow, learn and wake up. Sounds like a wonderful thing, doesn't it? But here's a piece of art by Gerry Bannan that captures the complexities of what it has often felt like to me. 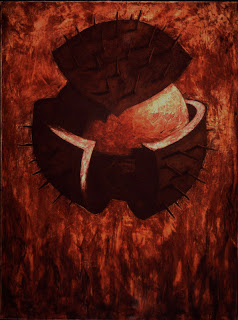 My most extreme experience with revelation came when I was just shy of 30 years old and was in graduate school. At the time, a professor had taken me under his wing and was helping me sort through alot of the confusion in my life that had resulted from the abuses of fundamentalist christianity. In retrospect, what this professor gave to me was complete and total trust. Something I had never experienced in my life. I had been taught to trust god, my parents, the church and any other authoritarian that happened to come along. But this professor gave me what I had been missing all along; the reality that I could trust myself. This changed my life forever and it was wonderful. But it wasn't without a cost.

Years of relying on authoritarians to tell me what to do was painful in the long run. But there was a certain comfort in the lack of responsibility for myself. As long as I was playing by someone else's rules and living someone else's life, I was off the hook. When I decided to take charge, I found out that I was on my own. No god in heaven or daddy here on earth was going to save me. And I couldn't rely on the rules to tell me what to do. I had to figure it all out for myself.

As this process unfolded, it stopped me in my tracks one day. I experienced, for the first and only time in my life, a full-fledged panic attack. It only lasted for about a day, but it was a real melt-down. I couldn't function at all for the whole day and didn't know what was wrong other than that I was scared to death. I was totally and completely wrapped in fear and became immobilized. Its only in retrospect that I've been able to identify what happened.

So, when we wonder about where all the fear in our world comes from, this might be part of the answer. Its a scary thing to be on your own and responsible for yourself. But, as David Whyte has put it so beautifully in this poem, if we break through, we find that we're really not alone at all.

Revelation Must Be Terrible

Revelation must be
terrible with no time left
to say goodbye.

of your body to say
you are leaving everything
and everyone you know behind.

Being far from home is hard, but you know,
at least we are all exiled together.
When you open your eyes to the world

you are on your own for
the first time. No one is
even interested in saving you now

as if it believed you could join
its vibrant dance
of fire and calmness and final stillness.

As if you were meant to be exactly
where you are, as if
like the dark branch of a desert river

you could flow on without a speck
of guilt and everything
everywhere would still be just as it should be.

its own bitter and beautiful cry
without the deep well
of your body resonating in the echo.

Knowing that it takes only
that one, terrible
word to make the circle complete,

revelation must be terrible
knowing you can
never hide your voice again.