Men fear thought more than they fear anything else on earth -- more than ruin, more even than death. Thought is subversive and revolutionary, destructive and terrible; thought is merciless to privilege, established institutions, and comfortable habits; thought is anarchic and lawless, indifferent to authority, careless of the well-tried wisdom of the ages ... But if thought is to become the possession of many, not the privilege of the few, we must have done with fear. It is fear that holds men back -- fear lest their cherished beliefs should prove delusions, fear lest the institutions by which they live should prove harmful, fear lest they themselves should prove less worthy of respect than they have supposed themselves to be. 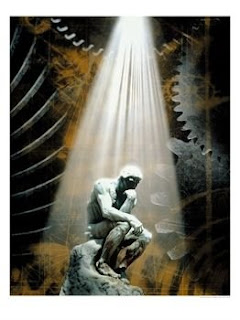 Perhaps our current day exploration of this can best be found in the comedy of Stephen Colbert, especially in his performance at the White House Correspondent's Dinner where he satirized the Presidents reliance on "gut instincts" and included the memorable line: "reality has a well-know liberal bias."

I'd like to think that liberals are much more comfortable with the fearlessness of thought, and for the most part, I think we live up to that. We have had to fight through the lies and media spin for years now to actually think about things like what it means to invade another country pre-emptively rather than loose ourselves in the need for revenge. We've had to think about what the constitution means when it provides for things like privacy and habeas corpus rather than give in to the feelings of fear and insecurity from "terrorists." We've had to think about what the words "separation of church and state" mean in a pluralistic society rather than worry that "our way of life" is somehow being threatened by those who hold different beliefs. At times we've even had the courage to think about our own privilege...as US citizens, or as white people, or as men, or as heterosexuals, or as able-bodied, or as members of the middle class...rather than give in to the fear of "the other."

I'd say that we have become very adept at thinking fearlessly about what comes at us from conservatives and the right. But I wonder how fearless we have been when it comes to thinking about our own delusions? Are we capable of self-examination or are we too, as humans, subject to falling into patterns of reaction rather than thoughtful response?

Nezua, at the Unapologetic Mexican, wrote beautifully about this a while ago in a post titled We Stand in No (Every) Place.

We are always new. Every moment is new. No moment need be like anything that came before, even when the resemblance is striking and our imagination lacking. And yet, of course we must learn from who we once were. But to let a lesson that once helped inform every step forward is to walk an old path, and to preclude the sight of new horizons from our view...

Because life is not like a series of books in a course on ...anything. It fluctuates. We fluctuate. We are not a being, but a becoming, as Friedrich once said. And sometimes ideas are hammered out and we draw lines and walls and are told we fall on one side or the other and so do our thoughts and so does all that follows from them...and so it goes. We buy into these illusory borders, too...

Being sure is but the borderwall we place around a heart to ward off the skinstripping wind of the next living moment.

I think what Russell wrote about how we get trapped into surety is very profound, especially that last line about being proven less worthy of respect than we have supposed ourselves to be. Buhdy addressed this a few months ago in one of my favorite essays he's ever written at Docudharma, Eating the Bitter.

We work hard and struggle to build a Progressive Utopia...until it gets too hard or someone says something we don't like. We are full of high ideals and noble goals. Until the shit hits the fan.

Working for high ideals and noble causes and making a difference (and believe me, we do) is sweet. Having to face our own limitations, our own pain, our own humanity and all its failings in the course of that...is bitter.

It is indeed bitter. I'm trying to eat a little of that bitterness myself right now as I examine the fortress of cynicism that has been built up around me over these last 8 years. My knee-jerk reaction is to disbelieve and fight every word I hear because the lies and deceptions have been so enormous. I don't want to be the fool, but I'm trying to learn how to stop myself from being so sure...to take the risk to really think about what I'm hearing and seeing. I don't want to miss that "newness of becoming" that Nezua was talking about simply because I'm too angry and jaded to notice the possibilities when they arise.

For me, the emotional constructs of cynicism from years of living in rage are very real and must be given their due attention. But I want to also think about where I am right now...fearlessly.
at October 04, 2008