I have written often about Riane Eisler, the author of The Chalice and the Blade. That's because I think her concept of partnership vs. dominance is critical to understanding both the challenges we're facing as a culture as well as the possibilities for change.

Last week I wrote about Saul Alinsky, who based his model of community organizing on understanding and working with the dynamics of power. He knew that the only kind of power folks in the forgotten areas of Chicago had was the power of large groups of people working together in partnership - especially when they came up against the monied interests.

All of that merged with what I've learned from Eisler when I read a diary this week at dkos by NCrissieB titled Obama Powerless? Not exactly... NCrissieB spent some time talking about power theory from a relational perspective and included this chart. 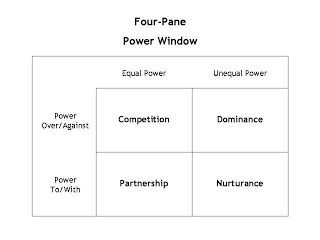 Of course, most of our understanding of power comes from the assumption of "power over/against." Almost every system and relationship we've seen modeled is one of competition and/or dominance. So its no wonder that our politics are focused around a competition to see who gets to be the dominator. And as long as money=power, the powers that be (PTB) win either way.

I'd like to digress just a moment and tell a quick personal story. Back in 2003, I became a hard-core Deaniac. It wasn't because of his policies. What really solidified my support was that he was the first politician I had known that seemed committed to the idea of "people power," which for me looked like a rejuvenation of democracy. And he didn't just talk the talk. Being a part of his campaign was an experience unlike anything I'd had before in the political arena - a true bottom-up organization. I never thought Dean himself was the draw for most of us that were involved. It was a movement of the people!

What I saw in Dean's take-down (which I believe was fueled by the establishment Democrats as much as the media and the Republicans) was that he had gathered enough of us to pose a serious threat to the PTB. I took his downfall very hard because it felt like a signal that the people really didn't have any power when the establishment decided to silence us. For the next few years, I believed that democracy was over in the United States. When the 2008 elections started heating up, I just assumed that the establishment candidates - Clinton and Guliani - would prevail and politics would go on the same regardless. BOY WAS I WRONG!!!!!!

I tell that story simply to demonstrate my priorities and to point out how shocked I was to learn - rather late in the campaign - that Obama was building on what Dean had done all along. And it seemed to be flying under the radar of most people's attention - including mine. It should have come as no surprise...Obama was schooled in the power theories of Alinsky and was building a partnership movement from day one.

But the question is: what does it mean now that he's been elected and is in the position to govern? Does he go back to the dominator model of power over and beat down the opposition? Does a partnership model of power affect how he handles foreign policy? I have to say that we progressives seem to favor partnership when it comes to foreign policy and dominance in domestic matters. I have to question our real commitment to the tough work of diplomacy if we think its the right approach to use with Pakistan but not good enough when it comes to the Republicans.

Of course, in a partnership model, none of us gets all that we want - only dominators get that. Partnership is messy and difficult. Its not the black and white thinking that leads to "you're either with us or against us." It takes a great deal of strength to listen to people we disagree with, hold on to our principles, and try to find a way to move forward together. Are we willing to live with that?

And finally, do we believe that the power of the people is strong enough to challenge the entrenched dominators? I don't think we know yet and frankly, sometimes I'm scared about the kind of reaction we'll find as we get close. But I'm willing to take a chance on it. Because for me, everything else is meaningless if democracy/partnership isn't possible.
at February 07, 2009