Last week I wrote about the failings of our current justice system as I see them. Today I'd like to offer an alternative for the phase of criminal justice that deals with how consequences are decided and implemented and then take a brief look at deterrence (or crime prevention).

Our current system is typically referred to as a "retributive justice" system. As such, crime is defined as a breaking of the rules/law. The state (or government) steps in and, through an adversarial relationship, determines guilt and establishes punishment.

It might surprise you to know that most all Native and even some Western European cultures (prior to about 1,000 AD) practiced what we now refer to as "restorative justice." In restorative systems, the crime is primarily seen as something that harms people and disrupts the fabric of relationships and community. A cooperative process is used to bring the offender face-to-face with those they have harmed (victim and/or community) to determine how best the harm can be repaired (which might or might not include our current forms of punishment - like jail).

Wikipedia quotes Eric Greif in defining what resotrative justice is all about.

a way of looking at restorative justice is to think of it as a balance between a number of different tensions:

Those balances are usually portrayed visually by something like this: 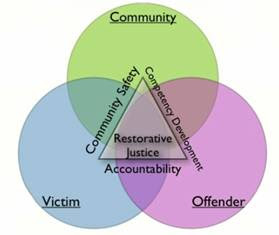 Methods for accomplishing these balances vary widely and are being practiced effectively around the world more than in the United States. They include victim/offender mediation, community conferencing, sentencing circles, and yes, truth and reconciliation commissions. But no matter the method, the focus is on bringing the offender and the victim/community together to repair the harm, which is another method of accountability.

I know that in this country, we believe that the only way to stop criminals is to put them in jail. This is demonstrated by the fact that we now have the highest incarceration rates in the world (750 inmates per 100,000 persons, the world average rate is 166 per 100,000 persons) and spend over $200 billion annually on enforcement and corrections. But if we look at recidivism rates, its pretty clear that our current system focused on punishment alone is not working for either rehabilitation or public safety.

Those statistics show that our current system doesn't work too well in preventing criminals from re-offending. But you might say that the threat of punishment does deter people from committing crimes in the first place. As NCrissieB pointed out in a great diary at dkos last week, that only holds true if you believe in the "myth of the rational criminal actor." The reality is that most crimes are either committed in a fit of passion or are supported by a criminal culture that outweighs the risks of punishment.

If we want to prevent people from committing crimes in the first place, we need to provide the kinds of supports that mitigate outbursts of passion and work to dismantle the reality of criminal cultures. That's much harder and messier work than waiting until someone is hurt and simply throwing the offender in jail.

In terms of recidivism, the practice of restorative justice is not yet widespread enough to draw too many conclusions, but the current data is promising (pdf). And for those who might think that restorative practices fall in the category of being "soft on crime," the reality is that "the more serious the offense, the better the results."

My conclusions are that if we want to better approach a system of justice in this country and impact the levels of crime in our culture, be it on our streets, in our homes, in the dark corners of the MIC, or in the financial markets, a combination of preventative measures and restorative practices are where I see the signs of hope.
at February 28, 2009