Having an impact on electoral politics

For most of us who consider ourselves activists, electoral politics can be a frustrating business. That's because too often we go into the voting both having to decide whether to vote for the lesser of two evils and know that, no matter how informed we are...the wingers, teabaggers, and idjit voters (video) get just as much of a voice in the process as we do.

Of course, on that last one, those of us in Minnesota got a wake-up call this past year when 312 of the over 2.8 million votes cast meant the different between another term for Norm Coleman and freshman Senator Al Franken. Boy, am I glad that I didn't sit that one out!

But today, I'm riding pretty high on the impact my one little vote had last night. Let me give you a little background about what's happening so you'll understand why.

As many of you are aware, MN has no incumbent running for re-election as Governor. As we speak, there are 12 Democrats running and 7 Republicans. This state likes to make politics a bit complicated, so we have dual tracks for weaning down those numbers. First of all, we have caucuses to determine party endorsements. Then, in a few months we'll have primaries that will determine who the candidates will be in November. It is up to each candidate to decide whether or not to abide by the party endorsement process. For example, Mark Dayton will run in the primary regardless and isn't even asking for the Democratic endorsement.

In the caucus process, getting the endorsement in a state-wide election is a 3 or 4 step process. Last night we had precinct caucuses. Over the next couple of months there will be district and/or county gatherings leading up to the state convention where the endorsement of a candidate for Governor will be completed.

BUT, last night those of us who attended this initial step participated in a non-binding straw vote. What will happen over the next few days is that many of those 11 remaining Democrats are likely to drop out of the race due to their poor showing in the straw poll.

And here's the kicker...I was one of less that 30,000 Democrats in this state that participated in this crucial first step in the process of deciding who our candidate for Governor is likely to be. I voted for RT Rybak, someone I have known since he was a journalist for alternative media before he became Mayor of Minneapolis. I see RT as one of those Minnesota politicians who is following in the footsteps of the great Paul Wellstone - progressive with the ability to appeal across-the-board to folks who feel disenfranchised from the system. 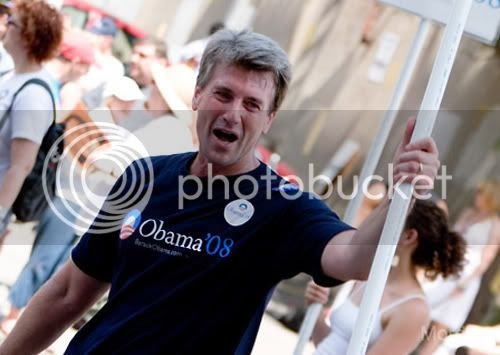 My vote for Rybak was one of less than 5,000 that made him the front-runner in this contest last night. Its certainly no guarantee that this will get him the endorsement, much less a win in the primaries and general election. But its sure as hell a good start. And I am so glad to have given about an hour of my time last night to be part of making that happen. I'll also be happy to give up a few more hours of my time in the next couple of months to attend upcoming conventions and see this process through.

Overall, I pretty much stayed out of the discussions about what we as Democrats should learn from the Senate race in MA a few weeks ago. Seems to me that we can project whatever message we want to hear from all of that. But the one thing I did take away from it is that Democrats who sat out of the early primary process were perhaps the biggest contributors to that failure. If Martha Coakley was such a poor candidate, then we need to get involved early to do whatever we can to ensure we have a say in the process. Waiting until we are left with choosing between the "lesser of two evils" is where we give up our power to have an impact.
at February 03, 2010