What I learned from "Reading Obama" 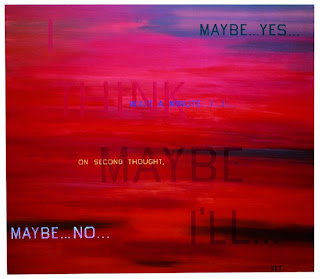 I Think I'll... by Ed Ruscha. This painting was brought in to the White House by the Obamas.


I read Dreams From My Father not too long after that stirring speech by Obama at the 2004 Democratic Convention. I was pretty intrigued by him as a politician, but my real interest in the book was that it was the story of a young multi-racial man coming to terms with his own identity. While Obama's story is unique to him, my work with young people (predominantly African American boys) has meant that I'm particularly interested in the process of identity formation for youth of color in this country. And Obama's was a very telling story in that regard.

By the time The Audacity of Hope was published, it was clear Obama was running for President. At the time, I was pretty disillusioned about politicians and figured it was just another one of those books that gets published to promote a campaign. So I didn't read it.

During the course of the 2008 Democratic Primary, I started to pay attention to Obama again. I'm not sure what caught my eye, but initially I think it was this diary by Populista. I started reading about community organizing and the power of "Camp Obama," with their focus on "Respect, Empower, Include." Now THAT's the kind of politics I could get excited about! There weren't many people covering this part of the campaign, but one of the best at it was Sean Quinn at 538 with his On the Road series. I read everything I could find like this and that's when I realized that Obama wasn't your typical politician. At that point...I was hooked.

And yet I still didn't read "The Audacity of Hope" until about a year ago. I finally did so on the recommendation of a friend. And it was perfect timing. At that point, many on the left had turned against Obama because they saw him as a compromiser. I was still seeing all of this through the lens of the "community organizer" in him. But this second book helped me realize that there was more to the story.

One of the things Obama had learned from his father - as well as history - is that ideologues who attach to the ongoing and entrenched polarization in our politics don't solve problems. They only deepen the divide. And from his mother, he learned that in order to breach that divide, we have to deal with our empathy deficit.

What has been fascinating to me is to watch, for years now, as progressives continue to suggest that Obama needs to take off the pink tutu and put on the boxing gloves. Every time he takes a swing at his opponents, they think he's seen the error of his "naive" ways and is finally getting it...only to revert to the same calls for toughness when he continues to insist that we not demonize the other side in the process. I often wonder if those folks will ever realize that there's something bigger going on with all of this.

That's why it was so encouraging to hear about James Kloppenberg's book Reading Obama. From his article in Newsweek about it:

...Obama is doing exactly what he said he would do. Perhaps the critics should read—or reread—the president’s own books...

Almost everything you need to know about Obama is there on the printed page. In contrast to the charges coming now from right and left, Obama is neither a rigid ideologue nor a spineless wimp. The Obama who wrote Dreams and Audacity stands in a long tradition of American reform, wary of absolutes and universals, and committed to a Christian tradition that prizes humility and social service over dogmatic statements of unbending principle. A child of the philosophical pragmatists William James and John Dewey, Obama distrusts pat formulas and prefers experimentation.

Although Obama’s reform agenda echoes aspects of those advanced by many Democrats over the last century, he has admitted—and this is the decisive point in understanding his outlook—that his opponents hold principles rooted as deeply in American history as his own. “I am obligated to try to see the world through George Bush’s eyes, no matter how much I may disagree with him,” he wrote in Audacity. “That’s what empathy does—it calls us all to task, the conservative and the liberal … We are all shaken out of our complacency.” Obama rejects dogma, embraces uncertainty, and dismisses the fables that often pass for history among partisans on both sides who need heroes and villains, and who resist more-nuanced understandings of the past and the present...

After almost two years as president, Obama has failed to satisfy the left for the same reason that he has antagonized the right. He does not share their self-righteous certainty. Neither his personal restraint nor the achievements of his administration should surprise anyone who has read his books...In November 2010, President Obama remains the man who wrote Dreams and Audacity, a resolute champion of moderation, experimentation, and deliberative, nondogmatic democracy. It’s just that the distorting mirrors of political commentary in America’s fun house can make it hard to recognize him.

Exactly!!!! Anyone who's read/listened to Obama knows that the traditional paradigm of the left/right divide is useless in understanding him. Whether you agree with him or not - it helps to throw away that lens and hear what he's actually saying.

Kloppenberg's summary really nails it - its that "self-righteous certainty" that creates a closed system where a lack of curiosity and the inability to empathize with those we deem opponents comes in - eventually leading to the extremities of polarization. I suspect that kind of certainty is actually rooted in defensiveness (and fear) and that it takes someone with a strong sense of identity (see "Dreams From My Father") to be willing to consider the roots of your opponent's views.

In this context, its no surprise to me that the Republicans are ramping up the polarization to the point of potentially dabbling with sabotage. That's what powerful systems do when they're threatened at their core...dig in and fight it out. But much more than a left/right battle, what Obama is challenging is the very nature of how we relate to one another. Do we dig in with our certainty and continue to feed the divide of polarization? Or are we strong enough to express our curiosity and empathy - even while we disagree? Its no surprise to me that this kind of challenge is going to take a lot more than 2 years to resolve.
at November 27, 2010