The SOTU and the Obama Method

Barack is not a politician first and foremost. He's a community activist exploring the viability of politics to make change.

One of the things Michelle is implying here is the question of whether or not politics is capable of making change. I know that is something I grew cynical about not too long ago. There are many theories about how and why our system of democracy seems to be failing us - especially those on the left. But the methods we could use to change that have proven fairly inadequate over the last couple of decades.

In an article written in December 2007 about the primaries, Mark Schmitt identified three methods of change and assigned each to one of the leading presidential candidates on the Democratic side.

Hillary Clinton's stump speech is built around the speechwriter's rule of three, applied to theories of change: one candidate believes you achieve change by "demanding" it, another thinks you "hope for it," while she alone knows that you have to "work for it."

That's accurate as a rendering of the candidates' language: Her message of experience and hard work, Obama's language of hope and common purpose, Edwards' insistence that those with power will never give it up willingly.

He goes on to talk about the benefits and limits of Clinton's belief in "work for it" and Edward's commitment to "demand it." And while Edwards later demonstrated deeper problems as a candidate than his method for change, you can see why so many of the frustrati were initially attracted to him with their belief that "yelling louder" was the answer.

Those two methods have been what many believed are the sum total of how you gain power in politics - challenge the opposition strongly enough to "defeat" them or work at it harder than you think they will be willing to. The trouble is, too many times we learned that rather than respond to these challenges by acknowledging defeat or giving up, our opponents have simply rebounded by being stronger and more determined. They're not backing down.

As many have done, its clear now that Clinton - in describing Obama's methods for change - underestimated him by saying he simply "hoped for it." We continue to hear this refrain from his critics on the left who call him "naive" or "spineless."

But Schmitt digs a little deeper and explains it this way:

The reason the conservative power structure has been so dangerous, and is especially dangerous in opposition, is that it can operate almost entirely on bad faith. It thrives on protest, complaint, fear: higher taxes, you won't be able to choose your doctor, liberals coddle terrorists, etc. One way to deal with that kind of bad-faith opposition is to draw the person in, treat them as if they were operating in good faith, and draw them into a conversation about how they actually would solve the problem. If they have nothing, it shows. And that's not a tactic of bipartisan Washington idealists -- it's a hard-nosed tactic of community organizers, who are acutely aware of power and conflict. 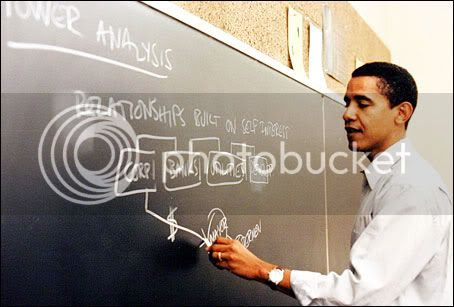 Jonathan Chait calls this The Obama Method and uses a foreign policy situation as an example.

Consider how Obama explained his approach toward Iran during a recent interview with Newsweek:

Now, will it work? We don't know. And I assure you, I'm not naive about the difficulties of a process like this. If it doesn't work, the fact that we have tried will strengthen our position in mobilizing the international community, and Iran will have isolated itself, as opposed to a perception that it seeks to advance that somehow it's being victimized by a U.S. government that doesn't respect Iran's sovereignty.

This is a perfect summation of Obama's strategy. It does not presuppose that his adversaries are people of goodwill who can be reasoned with. Rather, it assumes that, by demonstrating his own goodwill and interest in accord, Obama can win over a portion of his adversaries' constituents as well as third parties. Obama thinks he can move moderate Muslim opinion, pressure bad actors like Iran to negotiate, and, if Iran fails to comply, encourage other countries to isolate it. The strategy works whether or not Iran makes a reasonable agreement.

As Chait points out - Obama's method sets up the possibility for a win either way. He knows its unlikely his opponent will negotiate in good faith, but he'll give them a chance. And if they don't take it, they're marginalized and his position is stronger in the court of public opinion for having made the effort. In other words, he's playing for the audience, not the actors.

And this week, Chait saw Obama returning to that method in his SOTU.

Obama's various moves over the last few weeks, including the speech, are a return to the political method that launched his career. I wrote a column in 2009 about the Obama method. It involves establishing your reasonableness by taking bad-faith objections at face value and creating a mechanism to work through them...

Obama is positioning himself for a clash with Republicans by attempting to delineate their objections and declare his willingness to meet him halfway. When their positions inevitably prove more extreme -- when they're looking not to reduce high statutory corporate tax rates or excessive regulation but to open new loopholes and gut essential consumer protections -- then he has the high ground to oppose them.

Obama actually ended his speech with his most powerful expression of this method. In part it worked because Rep. Boehner was sitting right behind him at the time with VP Biden. But the nexus of Republican opposition will likely shift from the Senate to the House this session with their majority in that body. Boehner, like it or not, takes on the mantle of leadership in opposition.

He took the power of a shared American dream right to the person who is going to be the face of the opposition - and in a very personal way. Pettiness and incivility in opposition will only look small in comparison. Its unlikely Boehner will change his tactics in any way as a result - and Obama knows that. What's more likely is that Obama will gain audience approval for making the move and Boehner will appear less credible. In other words, when in comes to the power of public opinion, Obama first offers to share it with Boehner. But if Boehner rejects the offer...Obama owns it.

Chait calls this "conciliatory language as ruthless strategy." And down the drain goes the idea that Obama is naive.
at January 28, 2011