What does it mean to be "an American?" Revisited 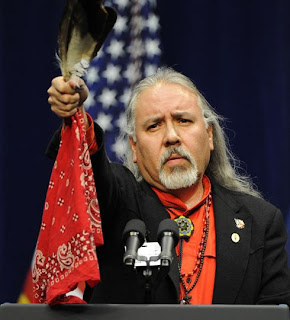 Over two years ago I wrote about Henry Cejudo and asked, "What does it mean to be an American?"

This week, I'm hoping that many others are asking that same question after hearing the blessing at the Tucson memorial service by Carlos Gonzales.

He opened his blessing, as he said, in the traditional way by introducing himself.

We have been here -- for myself, I am fifth generation in the valley of Tucson.

Much of our teaching of history ignores the fact that white people first took over land that was populated by Mexicans. The Mexican-American War took place from 1846-1848 and resulted in the United States incorporating much of the territory formerly claimed by Mexico.

The Treaty of Guadalupe Hidalgo, signed on February 2, 1848, by American diplomat Nicholas Trist and Mexican plenipotentiary representatives Luis G. Cuevas, Bernardo Couto, and Miguel Atristain, ended the war and gave the U.S. undisputed control of Texas, established the U.S.-Mexican border of the Rio Grande River, and ceded to the United States the present-day states of California, Nevada, Utah, New Mexico, most of Arizona and Colorado, and parts of Texas, Oklahoma, Kansas, and Wyoming.

So whether we are talking about the values of family and opportunity expressed in the life of Henry Cejudo or the history of people like Carlos Gonzales, what it means to be an American certainly incorporates their story. They are wonderful examples of who it is we claim to be.
at January 15, 2011