President Dilma Rousseff and the story of Latin America (updated) 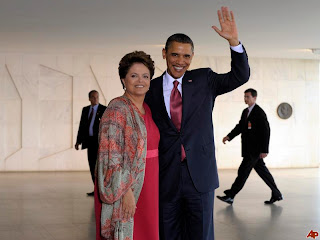 It seems as though the big question on the mind of the American press right now is "Why is Obama in South America with so many other crises going on in the world." Yesterday, he met with Brazil's President Dilma Rousseff and I believe her life story can begin to shed some light on why this trip is so important to the United States.

President Rousseff was born into an upper middle class family in Brazil. Her father was a Bulgarian immigrant and her mother a school teacher. In 1964, when Rousseff was 17 years old, the Brazilian military led a coup d'etat against the democratically elected government of left-wing President João Goulart. Anyone who knows much about the history of Central and South America will not be surprised that the military was supported in this by the US government in their on-going fears about the spread of communism.

Rousseff responded by joining left-wing and Marxist urban guerilla groups that fought against the military dictatorship. Eventually she was arrested and imprisoned for 2 years, including being tortured. She worked in local politics and then became involved with the campaign of presidential candidate Luiz Inácio Lula da Silva. After he won the election, she served in his cabinet and later became his Chief of Staff. She is now the first female to be elected President of Brazil. Here's an interesting article about Rousseff that was written just prior to her election.

The world's most powerful woman will start coming into her own next weekend. Stocky and forceful at 63, this former leader of the resistance to a Western-backed military dictatorship (which tortured her) is preparing to take her place as President of Brazil...

Her widely predicted victory in next Sunday's presidential poll will be greeted with delight by millions. It marks the final demolition of the "national security state", an arrangement that conservative governments in the US and Europe once regarded as their best artifice for limiting democracy and reform. It maintained a rotten status quo that kept a vast majority in poverty in Latin America while favouring their rich friends.

Rousseff's journey from guerilla to President is one that is mirrored all over Latin America as the people of many countries fought to cast off dictators and form real democracies - usually against the wishes of the United States.

And that brings us to why Obama's visit is important. Not only are these stories highly symbolic of the same kinds of struggles in the Middle East and Northern Africa. Contrary to what many on the right would have us believe - real democracy has been very good for the economies of countries like Brazil.

At a time when global markets are still struggling, Latin America may be one of the few sources of good news for recovering U.S. economy and a rare opportunity to tap new alliances. Thanks to close to two decades of economic reforms that tamed inflation, stanched populist spending, and opened markets to global completion, most of Latin America weathered the global financial crisis unscathed and was one of the first regions of the world to emerge from recession. The region is set to grow by more than 4 percent this year. Brazil, the regional powerhouse, grew 7.5 percent last year. Every $1 billion dollars the U.S. exports to Latin America represents 5,000 jobs in America. “The impressive growth that we've seen in Latin America in recent years is good for the people of the hemisphere, and it's good for us,” Obama wrote in Friday’s USA Today.

UPDATE: Obama just mentioned President Rousseff's story in his remarks at Theatro Municipal in Rio. I'll grab the transcript as soon as I can find it.

UPDATE 2: Here's how President Obama tied it all together in his speech today.

Today, we are seeing the struggle for these rights unfold across the Middle East and North Africa. We’ve seen a revolution born out of a yearning for basic human dignity in Tunisia. We’ve seen peaceful protestors pour into Tahrir Square -– men and women, young and old, Christian and Muslim. We’ve seen the people of Libya take a courageous stand against a regime determined to brutalize its own citizens. Across the region, we’ve seen young people rise up -– a new generation demanding the right to determine their own future.

No one can say for certain how this change will end, but I do know that change is not something that we should fear. When young people insist that the currents of history are on the move, the burdens of the past can be washed away. When men and women peacefully claim their human rights, our own common humanity is enhanced. Wherever the light of freedom is lit, the world becomes a brighter place.

Decades ago, it was directly outside of this theater, in Cinelandia Square, where the call for change was heard in Brazil. Students and artists and political leaders of all stripes would gather with banners that said, “Down with the dictatorship. The people in power.” Their democratic aspirations would not be fulfilled until years later, but one of the young Brazilians in that generation’s movement would go on to forever change the history of this country.

A child of an immigrant, her participation in the movement led to her arrest and her imprisonment, her torture at the hands of her own government. And so she knows what it’s like to live without the most basic human rights that so many are fighting for today. But she also knows what it is to persevere. She knows what it is to overcome -- because today that woman is your nation’s president, Dilma Rousseff.

I am so incredibly proud and moved that President Obama told this story. I hope the world recognizes the shift he is making in how we think about our past, present, and future with Latin America. I am sure the people of Brazil heard it loud and clear.
at March 20, 2011