Just a week ago, you'll remember that the Obama family celebrated Easter by attending services at Shiloh Baptist Church in DC. 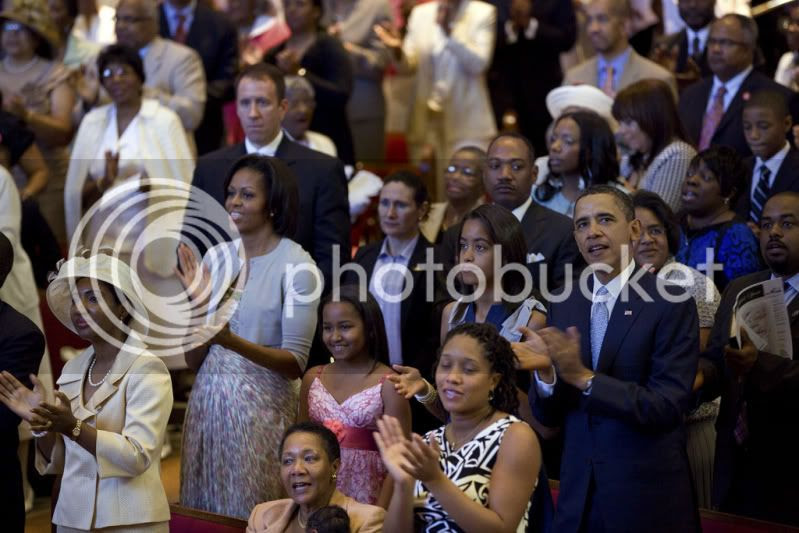 Shiloah Baptist was founded in the 1860's by former slaves and many recent Presidents have worshipped there, including Reagan, Bush I and Clinton.

But because President Obama visited there, apparently Sean Hannity felt the need to do some opposition research on the pastor, Rev. Wallace Charles Smith. He found a video of him making a speech on racism in January 2010 at Eastern University in Saint Davids, Pa. Here's what Smith said:

“It may not be Jim Crow anymore,” Smith says in the videotape. “Now, Jim Crow wears blue pinstripes, goes to law school and carries fancy briefs in cases. And now, Jim Crow has become James Crow, esquire. And he doesn’t have to wear white robes anymore because now he can wear the protective cover of talk radio or can get a regular news program on Fox.”

Let me just emphasize, this is not what Rev. Smith said on Easter when the Obama's visited the church. It was not even said at Shiloh Baptist Church. It was said in a speech he was asked to give about racism. I happen to think there is a lot of truth in what he said. But that's beside the point because Hannity uses this speech to resurface the controversy over Rev. Wright:

“I don’t believe that it is a coincidence out of all the churches in the country that Obama finds himself sitting in, why is he always in pews listening to such controversial spiritual leaders?” Hannity said.

As a result, Shiloh Baptist Church has received over 100 threatening phone calls and emails, including a fax that had the image of a monkey with a target across it's face.

But of course, none of this has anything to do with race...they just don't agree with Obama's policies.

My thoughts and prayers today are not only with the Obama's...but with Rev. Smith and the good people of Shiloh Baptist Church. None of you deserve this and I'd like you to know that there are many of us out here who stand with you.

UPDATE: From Blackwaterdog, I found this article by Charles Blow. What Trump and Hannity are doing is the "what." What Blow describes is the "why."

Donald Trump [and Sean Hannity] is still playing to suspicions of President Obama. And it’s no longer theoretical. It’s theological. For the detractors, truth is no longer dependent on proof because it’s rooted in faith: faith that American exceptionalism was never truly meant to cover hyphenated Americans; faith in 400 years of cemented assumptions about the character and capacity of the American Negro; and faith that if the president doesn’t hew to those assumptions then he must be alien by both birth and faith.

This is how the moneyed interests — of whom Trump is one — want it. That is how sleight of hand works: distract and deceive. They need this distraction now more than ever because the right’s flimsy fiscal argument — that if we allow fat cats to gorge, crumbs will surely fall — is losing traction...

So the right needs to backfill its shaky fiscal reasoning with political segregationist rhetoric — amplifying a separation of the “us” from the “other.”...

In 1965, the Rev. Dr. Martin Luther King Jr. described how the strategy of separating people with common financial interests by agitating their racial differences was used against the populist movement at the turn of the century, explaining that “the Southern aristocracy took the world and gave the poor white man Jim Crow.”

He continued that Jim Crow was “a psychological bird that told him that no matter how bad off he was, at least he was a white man, better than the black man.” He called this “their last outpost of psychological oblivion.”

But the right, with a new boost of energy from Trump [and Hannity], is reaching for new frontiers. The language and methodology are different, but the goal is the same: to deny, invalidate and subjugate, to distract from real issues with false divisions.