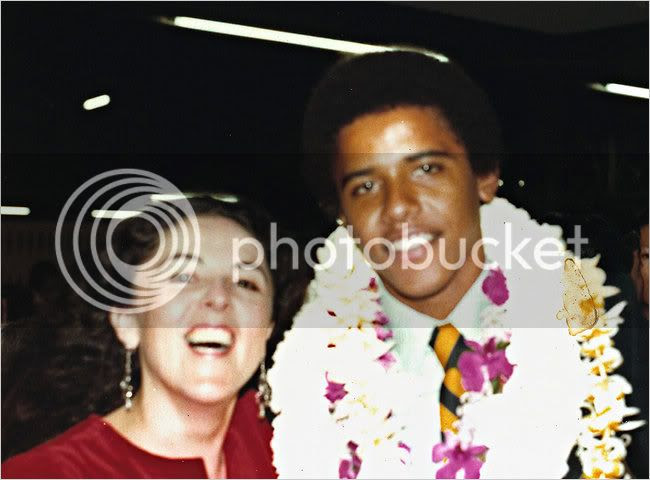 I always appreciate reading information about President Obama's history and family...it provides a depth of understanding for the man we see today. In that context, so much of the narrative in Dreams from My Father was devoted to the search for the absent parent. It seems that we've known much less about Ann Dunham and how the woman she was influenced her son.

In today's New York Time Magazine, Janny Scott fills in some of that missing information with an article titled Obama's Young Mother Abroad.

To describe Dunham as a white woman from Kansas turns out to be about as illuminating as describing her son as a politician who likes golf. Intentionally or not, the label obscures an extraordinary story — of a girl with a boy’s name who grew up in the years before the women’s movement, the pill and the antiwar movement; who married an African at a time when nearly two dozen states still had laws against interracial marriage; who, at 24, moved to Jakarta with her son in the waning days of an anticommunist bloodbath in which hundreds of thousands of Indonesians were slaughtered; who lived more than half her adult life in a place barely known to most Americans, in the country with the largest Muslim population in the world; who spent years working in villages where a lone Western woman was a rarity; who immersed herself in the study of blacksmithing, a craft long practiced exclusively by men; who, as a working and mostly single mother, brought up two biracial children; who believed her son in particular had the potential to be great; who raised him to be, as he has put it jokingly, a combination of Albert Einstein, Mahatma Gandhi and Harry Belafonte; and then died at 52, never knowing who or what he would become.

Obama placed the ghost of his absent father at the center of his lyrical account of his life. At times, he has seemed to say more about the grandparents who helped raise him than about his mother. Yet she shaped him, to a degree Obama has seemed increasingly to acknowledge. In the preface to the 2004 edition of “Dreams From My Father,” issued nine years after the first edition and nine years after Dunham’s death, Obama folded in a revealing admission: had he known his mother would not survive her illness, he might have written a different book — “less a meditation on the absent parent, more a celebration of the one who was the single constant in my life.”

I remember reading that line from the 2004 preface to Dreams and almost weeping myself from the regret you could hear in Obama's voice. By then it was too late and she was gone.

There's much from this article that explains Ann as well as the Indonesian influences on Obama's young life that we often overlook. Here's just one example:

After lunch, the group took a walk, with Barry running ahead. A flock of Indonesian children began lobbing rocks in his direction. They ducked behind a wall and shouted racial epithets. He seemed unfazed, dancing around as though playing dodge ball “with unseen players,” Bryant said. Ann did not react. Assuming she must not have understood the words, Bryant offered to intervene. “No, he’s O.K.,” Ann said. “He’s used to it.”

“We were floored that she’d bring a half-black child to Indonesia, knowing the disrespect they have for blacks,” Bryant said. At the same time, she admired Ann for teaching her boy to be fearless. A child in Indonesia needed to be raised that way — for self-preservation, Bryant decided. Ann also seemed to be teaching Barry respect. He had all the politeness that Indonesian children displayed toward their parents. He seemed to be learning Indonesian ways.

“I think this is one reason he’s so halus,” Bryant said of the pres ident, using the Indonesian adjective that means “polite, refined, or courteous,” referring to qualities some see as distinctively Javanese. “He has the manners of Asians and the ways of Americans — being halus, being patient, calm, a good listener. If you’re not a good listener in Indonesia, you’d better leave.”