The truth about Medicaid

Sometimes I think the Republicans want to throw so much crap out there that we don't have time to respond to it all. Today, Rep. Paul Ryan announced his budget plan. We know that it does everything from dismantling Medicare to raising taxes on middle class Americans and giving yet more tax breaks to the wealthy. There's a lot to tackle there.

But he also wants to block grant payment to states for Medicaid - which means that once the funds are used up, either the states pick up the tab or those who require assistance are SOL. Ryan describes this as welfare reform.

Matt Yglesias straightens him out.

In other words, people are supposed to think Medicaid is that “bad” kind of government spending, the one that goes to shiftless black folks not hard-working Americans like you and me and Paul Ryan. But look at the actual distribution of Medicaid dollars: 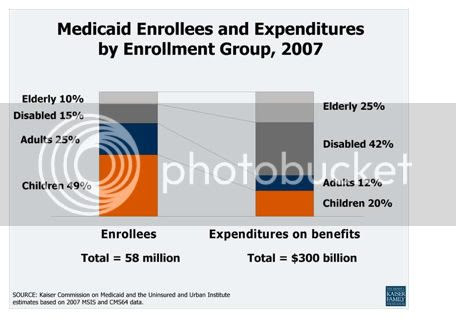 This is mostly a program for the elderly and the disabled. It’s the main way we finance long-term care in this country. If you don’t directly benefit from it, you very likely have a parent or grandparent who does and whose financial needs will simply tend to fall on you if the program is cut. Meanwhile, in terms of the “welfare” aspect of Medicaid by far the largest set of poor people it covers are poor children.