Ezra Klein put together a fascinating chart comparing the taxing and spending effects of the various proposals put forward for deficit reduction. 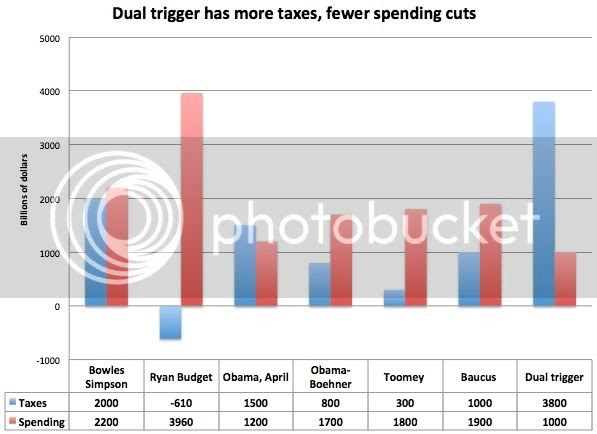 As a reminder, here's a little information on the background of each one:

Simpson/Bowles - the major proposal coming out of a bipartisan deficit reduction commission created by President Obama.

Obama, April - the plan President Obama proposed at this speech following the release of the Ryan plan.

Obama/Boehner - one of the plans released from the debt ceiling negotiations between Obama and Boehner.

Toomey - The last plan put forward by Republicans on the Super Committee.

Baucus - The last plan put forward by Democrats on the Super Committee.

Dual Trigger - what will happen as a result of the triggers agreed to in the debt ceiling deal and expiration of the Bush tax cuts.

It's important to note that all these plans have failed except the last one - the dual trigger. It is set to go into effect January 1, 2013 unless Congress does something between now and then to change it. To do so will require the President's signature or a Congressional overrule of a veto (2/3 majority).

How nice it is for Klein to put the tax increases in blue and the spending cuts in red. It creates the perfect picture of the two party's priorities.

For the Republicans, this makes it abundantly clear how ridiculous their major proposal - the Ryan plan - really is. Its pure class warfare in stark relief.

But for those on the left who claim that President Obama and the Democrats did such a poor job of negotiating on the debt ceiling deal - the absurdity of that claim is also there for all to see. If Congress does nothing - what happens is that the smallest amount of spending cuts coupled with the largest tax increases will go into effect on January 1, 2013.

Once again, I'm reminded of the pure genius of what the Democrats pulled off in that debt ceiling deal. They turned what was a serious hostage situation into a HUGE leverage advantage. Score one for our team!!!
at November 28, 2011