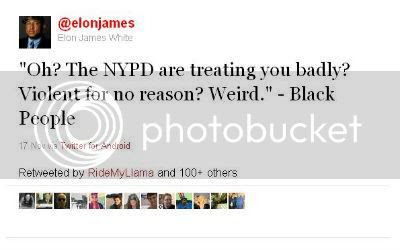 ...and then writes about it at The Root: Dear OWS: Welcome to Our World.

While the Occupiers were dealing with such abuse, during civil disobedience, communities of color suffer these type of injustices simply because it's Wednesday, and they may look like someone else. That's what happens to us -- and it's accepted as if it were just a day of the week.

I'm someone who supports Occupy Wall Street. I didn't write that tweet in an attempt to undermine the cause or to belittle the suffering of those who have been victims of the police. I wrote it to highlight the fact that these issues aren't new. Abuse of this kind is all too familiar to the black community. If someone hasn't directly experienced it, they probably know someone who has.

There have been discussions as to why there aren't more blacks involved in the Occupy movement. I can't speak for all of them, but I can speak about what I've read and the folks I've talked to directly about this. The type of outrage that pops up now at what many of us have lived with on a regular basis for years feels insulting.

It's hard not to notice that once the right number of white folks are affected, people want to take to the street. Unemployment numbers are high? We've had high unemployment for years. People are living in or near the poverty line? Yeah -- we know.

When minorities speak up and say there is an issue, we are told maybe we are doing something wrong. Perhaps we are targeted by the police because of what we are wearing. Perhaps we don't look for jobs the right way. Maybe we aren't educated enough. But now that it's affecting other folks, now there's a problem. Now we need to come together and fight the power. Someone tweeted at me that we need to come together and not point out silly differences like race because we're in this together!

I'm not making an argument for ignoring the movement because a lot of the movement ignored us. But I am saying take a moment to walk away from your righteousness to understand that your newfound plight has been some people's plight for generations.

We just didn't have a catchy name for it.

And right on time, to prove Elon's point, comes the story about a police raid on the home of civil rights activist Barbara Arnwine.

While Arnwine and members of the Lawyers Committee are calling for the Department of Justice to stop what she, and others call ‘assaults’ on voters, she found her and own family under assault.

She, her son, and nephew were all held at gun point while the officers raided her home.

The reason has yet to be determined...

Arnwine said the officers even went as far as to demean her education asking her in derogatory fashion, where did she go to school and the year she graduated as to suggest she wasn’t properly credentialed. When she told the officers that their actions weren’t warranted and she knew her constitutional rights she was met with ‘they don’t apply here today’.

The officers, with guns drawn, challenged Arnwine and her family, suggesting that if they made one wrong move, she and her family would be met with a unfavorable-like fate.

“Don’t make me hurt you” seemed to be the order of the day, recounted Arnwine.

Arnwine later said after the police failed to produce a warrant, and acted as though they didn’t know who she was, misspelling her name, that she thinks the swat team had the wrong house. She called the ordeal a “fishing exposition”.

Ahhh...her constitutional rights "don't apply here today." That about sums it up, doesn't it?

What most folks in the African American community will tell you is that this story hit the press because of Ms. Arnwine's persistence and notoriety (same with Henry Louis Gates). But it happens every day under the radar.

It's in that context that we need to understand what people like Elon and others are saying about their reaction to the sudden interest in police brutality by folks involved with OWS.
at November 29, 2011