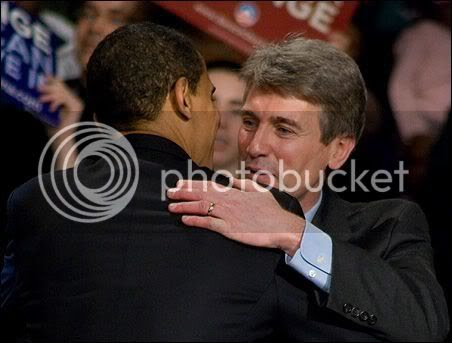 I just read today that Minneapolis Mayor RT Rybak will give the Democratic response to the next GOP debate in Des Moines this Saturday. You might want to watch. This guy is the real deal and has been a committed Obamabot since before most of us were paying attention.

Here's a fun story from the way back machine:

In the spring of 2005, a young Illinois senator came to Minnesota to speak at a DFL fundraiser. Minneapolis Mayor R.T. Rybak, St. Paul Mayor Chris Coleman, a couple of their top aides and a smattering of kids had 15 minutes to meet with the visitor.

The session turned into a Rybak sales pitch.

"I might have been a little overboard,'' Rybak recalled. "But I was determined to make the most of the time.''

Rybak didn't let up. The others in the room stood a bit back, surprised at Rybak's enthusiastic single-mindedness.

Rybak nodded, impatiently. When Obama finished his explanation, there was more conversation.

Rybak: "It's not often a single person with a single action can change the world. I think you can.''

Rybak didn't hear from Obama for several months. But through the summer of 2005, the mayor worked with a loosely connected, national "draft Obama'' movement...

This "ragtag'' movement started a "draft Obama'' web page. Nine months after that first meeting with Obama, Rybak wrote a piece on the site.

"I wrote something like, 'Barack is great but we must remember, this is not about him, this is about leading a movement from the bottom up.' ''

A day later, the phone rang in the mayor's office.

"It's Barack Obama!'' an aide said to the mayor.

Rybak: "Is that because I'm part Kenyan?''

Obama: "You were right. This is not about me. But I can lead a movement to take the country back.''

Rybak: "The second you announce, I'll be ready to support you.''

This past September, Mayor Rybak was chosen to be vice chair of the DNC - filling the spot vacated when Rep. Debbie Wasserman Schultz became chairwoman of the organization. In talking about his new duties when it comes to the 2012 election, here's what Rybak said.

"This will be a tough re-election," Rybak said, "but I'm so excited about making the case for somebody I believe in."

Rybak rattled off what he considers the highlights of Obama's first term: He "saved" the auto industry, put 30 million people on health care who otherwise would have been uninsured, mended international relationships that had been "horribly" damaged by the previous administration, and set the stage for the killing of Osama Bin Laden.

"I can go on and on," Rybak said. "We need to tell the story of what he's done against incredible odds."