First of all, lets remind ourselves that when it comes to the overall message that sparked all of this, President Obama and Mitt Romney agree.

So you have to wonder why conservatives and the Romney campaign are working so hard to make this dreamed-up controversy such a focal point.

Kimberley Strassel fills us in via the WSJ:


The Obama campaign's bigger problem, both sides are now realizing, is that his words go beyond politics and are more devastating than the Romney complaints that Mr. Obama is too big-government oriented or has mishandled the economy. They raise the far more potent issue of national identity and feed the suspicion that Mr. Obama is actively hostile to American ideals and aspirations. Republicans are doing their own voter surveys, and they note that Mr. Obama's problem is that his words cause an emotional response, and that they disturb voters in nearly every demographic.

Yep, that's exactly what dog whistles are designed to do - illicit an emotional response and disturb people. They're not really sure exactly what bothers them...but there's something.  And just to help that along, take a look at the photo they picked to accompany all that. 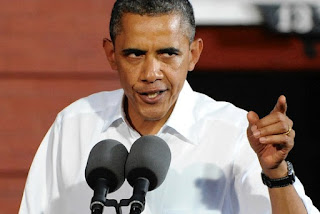 I'm not sure what "nearly every demographic" covers in Ms. Stassel's mind, but its clear from this ad put out by American Crossroads that they all have one very glaring thing in common. See if you can guess what that would be. They're not even trying to be subtle.