I'm definitely not one who is given to hyperbole. So when I suggest in my title that "Republicans don't believe in democracy," I'm not trying to stretch the truth or hype up a rage. I'm simply stating a fact.

I don't know when this distaste for democracy started - perhaps it goes all the way back to our founding when only white male landowners were given the right to vote. We know that this "conservative" position has been held at different times in our country's history by different parties. But its clear from the recent fights over voter suppression in the last election that it is now firmly encamped in the Republican Party.

But in some ways the Republican distaste for democracy goes even deeper than the franchise. I suspect the beginnings of those elements started with the cold war when government itself was defined as "big brother" rather than a democracy in which citizenship was the expectation.

If you want to see how that plays out today, take a look at how Dinesh D'Souza describes it in this clip in reference to Obamacare. And yes, I know that D'Souza has been disgraced recently. This discussion seems to have happened just days before that story broke. And so there is significant irony in hearing him - of all people - talk about morality.

But all that aside, I think he perfectly captures the current Republican view of our government. And it bears absolutely NO resemblance to a democracy.

In the clip D'Souza and Michael Shermer are asked how the Christian ethic of taking care of the poor and the sick affects their view of Obamacare. Shermer simply dismisses health insurance as a political issue rather than a moral one (huh?)

But D'Souza comes up with an analogy that describes how Republicans tend to view government. He is hungry and Shermer has a sandwich. If Shermer gives him the sandwich, that is a "moral" transaction. But his view of government involvement would be analogous to Obama coming along and holding a gun to Shermer's head demanding that he give D'Souza the sandwich.

Do you see what he did there? Government is not about we the people, but a system of threats and extortion by someone with a gun to our heads. It is the classic frame of "us vs them" with the "us" being the disempowered victims of the all-powerful "them." Even our founding fathers - who had such a limited view of the franchise - were pretty clear that democratically elected representatives were there to do the will of the people.

As we argue different policies with Republicans, I think this is the deep subtext that creates the divisions between us. Its important that we challenge this kind of thinking and call it out.

That's what President Obama had in mind when he focused his speech at the Democratic Convention on citizenship.


We honor the strivers, the dreamers, the risk- takers, the entrepreneurs who have always been the driving force behind our free enterprise system, the greatest engine of growth and prosperity that the world's ever known.

We, the people — recognize that we have responsibilities as well as rights; that our destinies are bound together; that a freedom which asks only, what's in it for me, a freedom without a commitment to others, a freedom without love or charity or duty or patriotism, is unworthy of our founding ideals, and those who died in their defense. 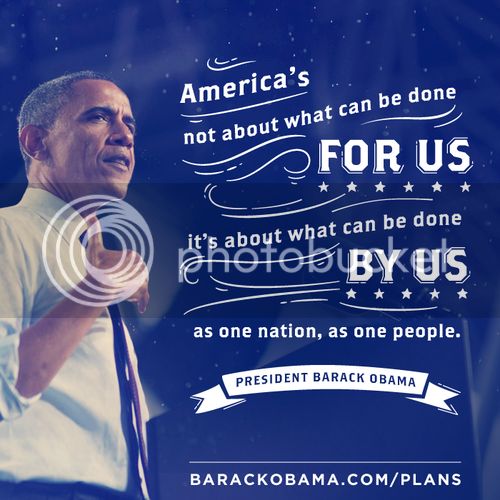