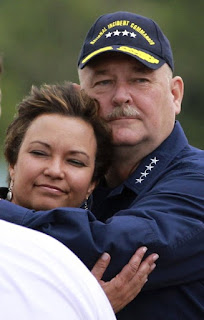 When I heard that Lisa Jackson was leaving her position as head of the EPA, I immediately thought of this picture. It was taken as she and Thad Allen - the National Incident Commander for the Gulf Oil spill - waited for President Obama to arrive to tour the damage in the Gulf and get a briefing.

The photo spoke volumes to me about the trust and support these two leaders had in each other as they faced such a daunting task during those difficult days. They were under siege - not just from the incredibly difficult job they had to do - but also as everyone on both the left and right panicked and looked for someone to blame. And yet obviously...they had each other to lean on.

If you'd like to read more about what Lisa Jackson accomplished in her 4 years at the EPA, take a look at this article from her home state of New Jersey.


Jackson, the first African-American to head that agency, announced Thursday that she will be stepping down from the EPA after the first of the year, paving the way for a successor to take over energy policy point person during President Obama's second term...

Jackson's departure won't generate the same flurry of political speculation that other high-profile changes, such as Hillary Clinton leaving the State Department, have created. Yet make no mistake, Jackson will be missed by all true friends of the environment, because of her stern independence, her unflinching efforts to combat carbon pollution and her determination to curb global warming.

One would think, given all the weather-related upheaval we've been through in the past two years, that global climate change might no longer be a matter of dispute. And yet it is, especially among some Republican lawmakers who have a difficult time accepting even basic scientific concepts. This, of course, put them on a collision course with Jackson...

Indeed, Jackson's record at the EPA will be remembered for the right reasons: helping to finalize a historic new rule doubling fuel-efficiency standards for cars and light trucks by 2025 — based on Jackson's so-called "endangerment finding" regarding carbon dioxide and climate change — and fighting hard to establish new standards that force power plants to control mercury, arsenic and other airborne toxic pollutants. And, perhaps more than any predecessor, Jackson tried to make the impact of industrial pollution on low-income neighborhoods a priority.