Can you catch what's wrong with this graph?

A week ago I pointed out that Republicans like Sen. McConnell are hoping we'll forget that the work that's been done so far on reducing the federal deficit included more spending cuts than tax increases. That's why I was glad that the Center for American Progress did such a good job of pointing out that the 10 year projected deficit has been reduced by $2.4 trillion in the last 2 years.

But I wonder if you can catch what's wrong with this graph they used? 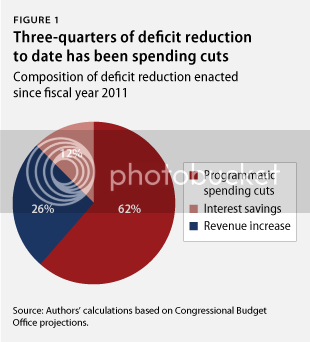 Last time I checked, three-quarters equaled 75% - not 62%. The only way you get to three-quarters is if you consider interest savings to be the same thing as spending cuts...which is ludicrous. The truth is that spending cuts have accounted for a little less than two-thrids of the deficit reduction.

That isn't nearly as egregious of a misrepresentation as the one Sen. McConnell was trying to pull off in the other direction - forgetting completely about the savings that have been captured so far. But we don't need overblown hyperbole to make a point.
at January 11, 2013