Other than the fact that the Republicans totally caved on the debt ceiling fight, the really big news of the day is the launch of Organizing for Action. I find it fascinating that it is Michelle Obama that made the announcement.

But the fact that this is happening should come as no surprise to anyone who has actually been listening to the President. Last fall I suggested that we should all be prepared to keep working after the election was over. President Obama said it loud and clear...


But for me to get those accomplished, I do think I’m going to need to bring in the voices of the American people much more systematically, much more regularly.

Finding the right mechanisms to do that is something that we’re going to spend a lot of time thinking about. Obviously, the Internet and the digital age helps. We’ve been able to do that on our campaign. We now need to translate that more to how our government works. But I think the American people are ready for it.

In his speech at the Democratic Convention with its focus on citizenship:


It’s not a fear-versus-a-nice-guy approach that is the choice. The question is: How do you shape public opinion and frame an issue so that it’s hard for the opposition to say no.

At a Univision forum:


I think that I’ve learned some lessons over the last four years, and the most important lesson I’ve learned is that you can’t change Washington from the inside. You can only change it from the outside. That’s how I got elected, and that’s how the big accomplishments like health care got done, was because we mobilized the American people to speak out. That’s how we were able to cut taxes for middle-class families.

So something that I’d really like to concentrate on in my second term is being in a much more constant conversation with the American people so that they can put pressure on Congress to help move some of these issues forward.

Now is the time. 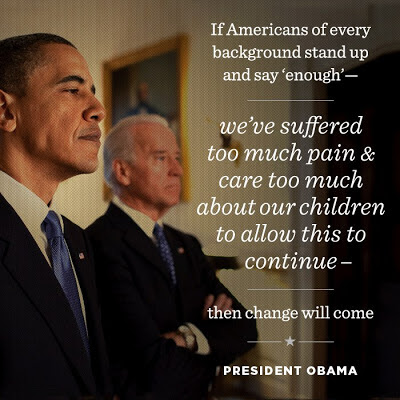 None of us want to think about the day 4 years from now when President Obama's second term is over. But as our Community Organizer-in-Chief, this is likely to be his true legacy.