The Arc of History: from Rosa to Sonia

I know I've used this quote from Michelle Obama here a lot. But I want to post it again following some of the outrageous things we heard yesterday from the Supreme Court to the punditry.

If we keep showing up, if we keep fighting the good fight and doing what we know is right, then eventually we will get there.

Last night as I was trying to absorb all the news of the day, its that last part that I thought about. In a way, she is saying the same thing Dr. Martin Luther King, Jr. was referring to when he talked about "the arc of history being long, but bending towards justice."

So imagine with me for a moment what the world probably sounded like the day after Rosa Parks refused to give up her seat on that bus. Just think about what the Scalia's of the world were saying back then about that simple brave act.

And yet, was it the Bull Connors of those days who was honored yesterday with a statue in the halls of Congress? Not even remotely. 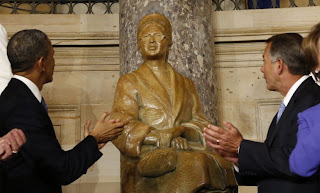 No matter what happens with the outcome of the Supreme Court ruling on the Voting Rights Act, we'll keep showing up, fighting the good fight and doing what we know is right. In the end, which of these Supreme Court Justices will go down as being on the right side of history? Will it be the one who said that the Voting Rights Act was a perpetuation of racial entitlement? Or will it be this one? 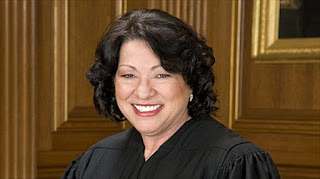