No one can ever credibly accuse President Obama of being inconsistent. As a matter of fact, it is his faithfulness to his own guiding principles that has engendered my trust (something his critics find disdainful) - whether I agree with him or not.

So lets once again take a trip in the way-back time machine to look at what he said back in September 2005.


...I firmly believe that whenever we exaggerate or demonize, or oversimplify or overstate our case, we lose. Whenever we dumb down the political debate, we lose. A polarized electorate that is turned off of politics, and easily dismisses both parties because of the nasty, dishonest tone of the debate, works perfectly well for those who seek to chip away at the very idea of government because, in the end, a cynical electorate is a selfish electorate...

Our goal should be to stick to our guns on those core values that make this country great, show a spirit of flexibility and sustained attention that can achieve those goals, and try to create the sort of serious, adult, consensus around our problems that can admit Democrats, Republicans and Independents of good will. This is more than just a matter of "framing," although clarity of language, thought, and heart are required. It's a matter of actually having faith in the American people's ability to hear a real and authentic debate about the issues that matter.

Now lets take a look at what he said in his Weekly Address today.


That means asking ourselves three questions every day: How do we make America a magnet for new jobs? How do we equip more of our people with the skills those jobs require? And how do we make sure that your hard work leads to a decent living?

That has to be our driving focus – our North Star. And at a time when our businesses are gaining a little more traction, the last thing we should do is allow Washington politics to get in the way. You deserve better than the same political gridlock and refusal to compromise that has too often passed for serious debate over the last few years.

That’s why I’ve been reaching out to Republicans and Democrats to see if we can untangle some of the gridlock...

The fact is, America is a nation of different beliefs and different points of view. That’s what makes us strong, and frankly, makes our democratic debates messy and often frustrating. But ultimately what makes us special is when we summon the ability to see past those differences, and come together around the belief that what binds us together will always be more powerful than what drives us apart...

Making progress on these issues won’t be easy. In the months ahead, there will be more contentious debate and honest disagreement between principled people who want what’s best for this country. But I still believe that compromise is possible. I still believe we can come together to do big things. And I know there are leaders on the other side who share that belief.

So I’ll keep fighting to solve the real challenges facing middle-class families. And I’ll enlist anyone who is willing to help. That’s what this country needs now – and that’s what you deserve.

It is that kind of talk that drives the ideologues nuts because it obscures the traditional battle lines with pragmatism. On the right, they realized quite a while ago that their only hope of defeating President Obama was to slap his outstretched hand with total obstruction.

The ideologues on the left have been no less virulent. A common theme has been to call the President "naive." But apparently some go even farther than that and call him "narcissistic."


President Obama is a man of many admirable qualities and strengths. But he has a character flaw worthy of Shakespearean tragedy that is perfectly illustrated in this little snippet. That flaw is the desire common to many tragic anti-heroes imbued with a certain narcissism, to believe that he can do what no others can--in this case, to transcend seemingly impossible political divides by bringing the two parties together to achieve bipartisan policy goals.

As we've come to see over these last 4 years, all of these folks prefer gridlock and/or chaos as long as the lines of purity and ideology are held firm.

But as President Obama said in that first quote - he understands that "a cynical electorate is a selfish electorate." And that is EXACTLY the aim of obstruction - as former Republican Congressional staffer Mike Lofgren explained.


A couple of years ago, a Republican committee staff director told me candidly (and proudly) what the method was to all this obstruction and disruption. Should Republicans succeed in obstructing the Senate from doing its job, it would further lower Congress's generic favorability rating among the American people. By sabotaging the reputation of an institution of government, the party that is programmatically against government would come out the relative winner.

Yes...we deserve better than that!

There are probably many approaches to dealing with this Republican intransigence. For progressive ideologues, the favored one is to stand firm and fight back...leading to gridlock and/or chaos. But as Mark Schmitt identified quite a while ago, Barack Obama has always had a different approach.


One way to deal with that kind of bad-faith opposition is to draw the person in, treat them as if they were operating in good faith, and draw them into a conversation about how they actually would solve the problem. If they have nothing, it shows. And that's not a tactic of bipartisan Washington idealists -- it's a hard-nosed tactic of community organizers, who are acutely aware of power and conflict.

I believe that it is President Obama's consistency with this approach that is leading to more of a consensus on the idea that the Republican opposition has nothing. In other words, its showing. That's why we won in 2012 and it also might be why there is a glimmer of hope for the development of a common sense caucus.


That’s what this country needs now – and that’s what you deserve. 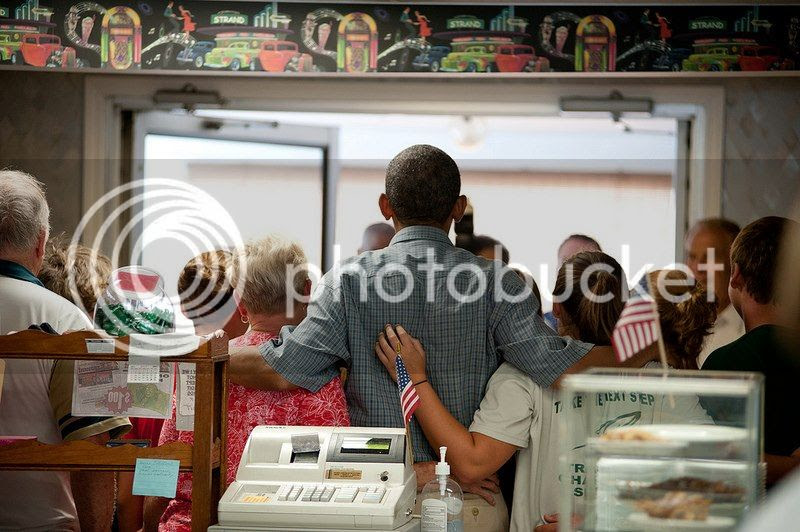 "What binds us together will always be more powerful than what drives us apart." President Barack Obama
Posted by Nancy LeTourneau