The irony of giving the white guy credit for diversity

Perhaps you've seen this chart that Media Matters put together on the gender/ethnic diversity in Sunday talk shows. The far right column represents a tally of the guests who appeared on MSNBC's Up with Chris Hayes. 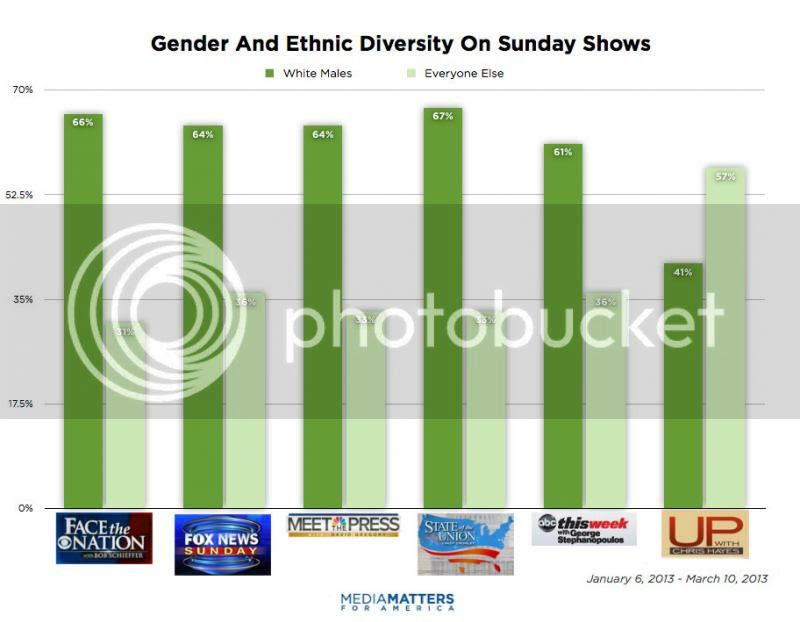 That's pretty impressive work for Chris and its important to recognize that it didn't just happen naturally...he had to work at it.

But the irony is that Chris is followed on MSNBC on Sunday by - wait for it - a black woman named Melissa Harris-Perry. Her guest line-up wasn't included in the tally (hence, the irony), but based on what I've seen of her show, she'd even knock Chris Hayes' record out of the park.

I can't help but ask myself questions about why Media Matters didn't look at the demographics of Melissa's show. Is it because she's simply expected - as a black woman - to have more diversity on her show but when white men do it there's something to notice? Is it because a show hosted by a black woman doesn't matter in the big scheme of things? Is it because her show doesn't get the ratings that the other one's do? Could that be because fewer people watch shows about topics related to women and people of color with guests that can best discuss those topics?

I don't know the answers to those questions. But it strikes me that no matter what the reason, this is a pretty good example of the domination of white male thinking in our culture.
Posted by Nancy LeTourneau