In case you missed Bob Cesca's take-down of Glenn Greenwald's fear-mongering about domestic surveillance drones, please go take a look at it here. Basically what it comes down to is that this is what we're supposed to be so afraid of...“It’s a radio controlled toy airplane with a fancy camera!” 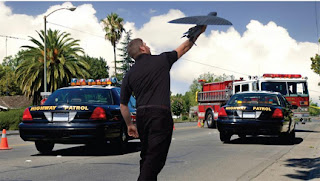 But in addition to that, we're now supposed to be all hot and bothered that using a drone like that instead of a helicopter will actually save police departments money...oh the horror!!!!

By comparison, the ACLU argues, "it’s easy to foresee a day when even a professional police drone could be acquired for less than a hundred dollars, including maintenance costs."

Apparently for the ACLU and people like Greenwald, that presents a problem.

I love the work the ACLU has historically done as much as anyone. But it really busts my chops when they feed into one of the worst narratives out there about how liberals simply love any government spending regardless of its efficacy.

But I guess that's what happens when you mire yourself in an ideological quagmire about a particular weapon rather than keep your eye on the prize of ending a war.
Posted by Nancy LeTourneau