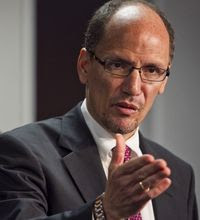 Reports are that President Obama will choose Thomas Perez - who currently heads the DOJ Civil Rights Division - to be his next Secretary of Labor.

Back in early 2011, I started paying particular attention to the activities of the DOJ.  That's because I saw Attorney General Eric Holder under attack from both the left and right. It seemed to me that most of the Department's accomplishments were going unnoticed with all the flurry over everything from Fast and Furious to the lack of frog-marches by bank executives.

As I kept an eye out for those accomplishments, I noted that almost all of them had to do with the work of Thomas Perez and the Civil Rights Division. So I'd like to summarize what this man has accomplished in less than 4 years.

Its important to keep in mind the havoc in the Civil Rights Division that was the legacy left by the Bush administration. Here's a bit of that story from 2006:


The Bush administration is quietly remaking the Justice Department's Civil Rights Division, filling the permanent ranks with lawyers who have strong conservative credentials but little experience in civil rights, according to job application materials obtained by the Globe.

Perez' first order of business was to get qualified people hired in the Division. And boy...did he accomplish that! If you want to take a look at the results - check this out.

Pretty quickly, the Civil Rights Division took over prosecution of the New Orleans police officer shootings/cover-up in the aftermath of Katrina. That led to an overall investigation of police brutality in the department and consent decree about the changes that were necessary. In subsequent years, the Civil Rights Division has investigated 17 police and sheriff's departments for police brutality - the most in the Division's 54 year history.

Speaking of sheriffs, it was Perez who brought suit against the infamous Joe Arpaio after he refused to cooperate with an investigation of racial profiling.

Perez has also gone after banks for reverse redlining and when foreclosure fraud involved the targeting of African Americans and Latinos.

In something that I am particularly passionate about, it was Perez' Civil Rights Division that sued Meridian, Mississippi for perhaps the first-of-its-kind civil rights violation known as the school to prison pipeline.

Finally, it was the Civil Rights Division that sued the states of Texas and South Carolina for their voter ID laws.

Overall I'd say that's a pretty astounding record for 4 years. There is a part of me that will be sad to see Perez leave DOJ's Civil Rights Division. But I'm sure he'll be replaced by someone equally as committed and this nomination is GREAT news for labor. Perez' last position was as Secretary of Maryland's Department of Labor, Licensing and Regulation. Take a look at what his bio says about that job.


...protects consumers through the enforcement of a wide range of consumer rights laws, including the mortgage setting; enforces workplace safety laws that provide critical safeguards to workers and communities; enforces wage and hour, and other worker protection laws that ensure wage security; and collaborates with businesses and workers to address critical workforce development needs and build a world-class workforce. Mr. Perez was a principal architect of a sweeping package of state lending and foreclosure reforms to address the foreclosure crisis in Maryland.

With that background, I'm sure the lunatic caucus in the Senate will put up quite the stink about this nomination. He's already been through one confirmation process for his current post where there was a fair amount of foot-dragging. So as the attacks begin - please keep his actual record in mind. This man is one of my heroes.
Posted by Nancy LeTourneau