I'm not a doctor and I don't play one on the internet. But it seems clear to me that Senator Rand Paul is suffering from the very same affliction that plagued Mitt Romney during the 2012 campaign...Romnesia.

And then yesterday, he said this:


“…I’ve never argued against any technology being used when you an imminent threat, an active crime going on. If someone comes out of a liquor store with a weapon and 50 dollars in cash, I don’t care if a drone kills him or a policeman kills him, but it’s different if they want to come fly over your hot tub, or your yard just because they want to do surveillance on everyone, and they want to watch your activities.”

Just a bit of an equivocation there, I'd suggest.

But then when his #StandWithRand supporters got pissed at him for that, here's how he explained it last night.


My comments [on Tuesday] left the mistaken impression that my position on drones had changed. Let me be clear: it has not. Armed drones should not be used in normal crime situations. They only may only be considered in extraordinary, lethal situations where there is an ongoing, imminent threat. I described that scenario previously during my Senate filibuster.

Now...unless you think that someone coming "out of a liquor store with a weapon and 50 dollars in cash" should be considered an "extraordinary, lethal situation where there is an ongoing, imminent threat" (already one gigantic equivocation), then I'd suggest we're looking at a rather severe case of Romnesia.

But really, the only reason this particular iteration of that malady stands out is because Sen. Paul drew so much support from the emo/libertarian crowd for his filibuster. As we saw with candidate Romney, Republicans do this kind of thing all the time. Its why some folks like me are suggesting that they are in a post-truth/post-policy mode these days. They've made the calculation that they can say something one day and completely contradict themselves the next. The only thing that is consistent about anything they propose is that it has to be in direct opposition to whatever President Obama is doing/saying. That's what Romnesia does to you.

Here you go Senator Paul - I believe a little brain laxative might be just what the doctor ordered ;-) 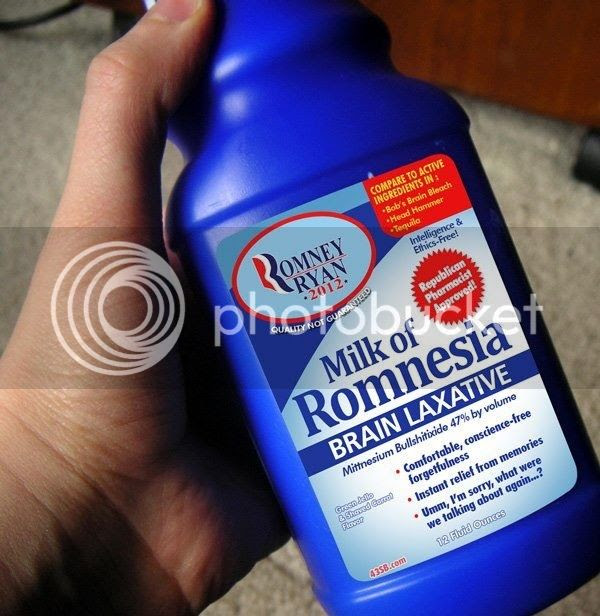