We hear this one (mostly in back rooms) in politics all the time. It is usually used by ideologues who are defending a position and assume that any small change in the status quo is an attempt towards undermining it. Ultimately, the slippery slope argument is a conservative (in the truest sense of the word) strategy. It suggests that in order to defend a position, the current state of affairs must be maintained regardless of changing circumstances. Any adaptation is a threat.

You can bet your bottom dollar that gun rights activists are engaging in this kind of argument right now. In their minds, ANY attempt to restrict the right to own guns is a slippery slope towards the demise of the second amendment.

But liberals have used it too. Most often it has been one of the reasons that any attempt to limit a woman's right to chose is a slippery slope towards ending Roe v Wade.

I would suggest that - while not always stated up front - its the slippery slope argument that is behind much of the lefts reaction to the President's proposal to implement chained CPI. I say that because a 0.3% reduction in the cost of living increase for affected programs is NOT the end of Social Security as we know it. And yet you'd think that is what President Obama is proposing from the reaction we've seen so far.

In addition, we have yet to see the specifics of how his proposal will mitigate the effect of this change on the most vulnerable. But we do know the principles under which it will be designed.


There are two major changes necessary. First, add a bump in benefits to the very old, who are more likely to have high healthcare bills and to have exhausted their savings that supplemented their Social Security income. Second, exempt Supplemental Security Income, which serves the poorest, disabled and blind but still often leaves people below the poverty line.

Given that, its discouraging that we're hearing things like this from politicians we're supposed to trust. 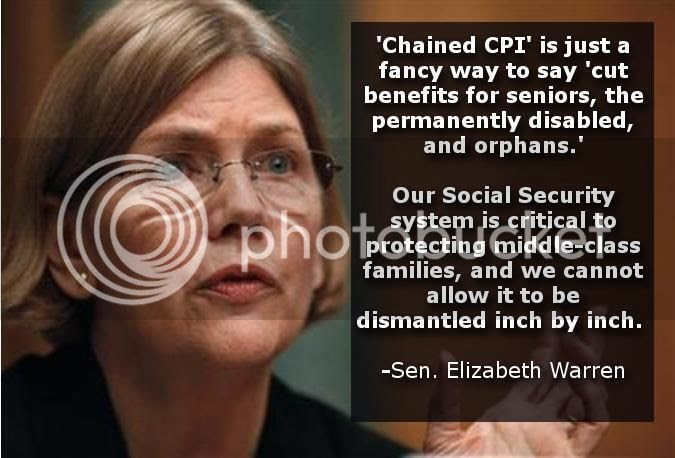 Once we see President Obama's actual proposal, that first sentence will not be true...the disabled on SSI will not be affected. But ultimately, its the slippery slope argument Senator Warren is making in that second sentence.

At its root, I reject any argument made on the basis of the slippery slope. If you believe that chained CPI is a bad policy or bad politics, make your case. I think its possible to do that on this issue. So lets talk.

But slippery slopes are what we rely on when we want to fear-monger rather than discuss actual policies. I don't think liberals should be relying on fear-mongering to make our case. Its counter-productive to our basic values. Here's how President Obama talked about that.


I firmly believe that whenever we exaggerate or demonize, or oversimplify or overstate our case, we lose. Whenever we dumb down the political debate, we lose. A polarized electorate that is turned off of politics, and easily dismisses both parties because of the nasty, dishonest tone of the debate, works perfectly well for those who seek to chip away at the very idea of government because, in the end, a cynical electorate is a selfish electorate...

Our goal should be to stick to our guns on those core values that make this country great, show a spirit of flexibility and sustained attention that can achieve those goals, and try to create the sort of serious, adult, consensus around our problems that can admit Democrats, Republicans and Independents of good will. This is more than just a matter of "framing," although clarity of language, thought, and heart are required. It's a matter of actually having faith in the American people's ability to hear a real and authentic debate about the issues that matter.