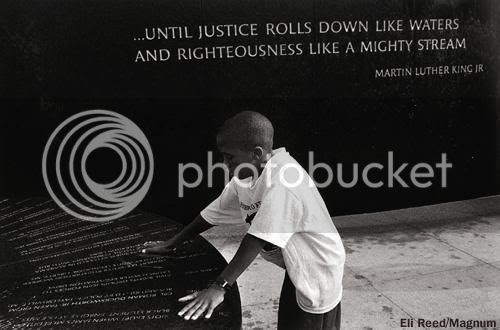 As I mentioned the other day, I've been thinking a lot about what "justice" means. And I was particularly struck with this statement about it from Al Giordano.


There are times when “The Law” is dressed up in liberal language in a way that masquerades the bloodlust behind witch hunts and impulses to scapegoat individuals for crimes or taboos that, in a democracy, we’re all responsible for having enabled.

The photo above was taken at the Civil Rights Memorial at the Southern Poverty Law Center. It was created by Maya Lin (the same women who created the Vietnam Memorial Wall in D.C.) and features the biblical quote used by Martin Luther King, Jr. at the beginning of the Montgomery Bus Boycott and again in his I Have a Dream speech..."Until justice rolls down like waters and righteousness like a might stream."

Its clear that Dr. King was a man committed to justice. But I can't think of a time when that included a call to punish those who committed heinous crimes against him or others involved in the movement. He certainly had ample opportunities to do so. There was no shortage of brutality in the beatings, lynchings, bombings and assassinations of his day that might have stirred a call to implement the "rule of law" for the perpetrators.

But take a look at the powerful words he spoke when four little black girls were killed at the bombing of the church in Birmingham, AL.


These children - unoffending, innocent, and beautiful - were the victims of one of the most vicious and tragic crimes ever perpetrated against humanity.

And so I stand here to say this afternoon to all assembled here, that in spite of the darkness of this hour, we must not despair. We must not become bitter, nor must we harbor the desire to retaliate with violence. No, we must not lose faith in our white brothers. Somehow we must believe that the most misguided among them can learn to respect the dignity and the worth of all human personality.

That last paragraph is what Ta-Nehisi Coates was talking about when he referred to Dr. King's "good crazy."


King believed in white people, and when I was a younger, more callow man, that belief made me suck my teeth. I saw it as weakness and cowardice, a lack of faith in his own. But it was the opposite. King's belief in white people was the ultimate show of strength: He was willing to give his life on a bet that they were no different from the people who lived next door.

For Dr. King, justice wasn't simply about punishing the people directly responsible for planting that bomb. He paints the broadest possible brush in capturing those who are accountable for the death of those four little girls...ministers, politicians, government, and even African Americans who stood on the sidelines of the movement. As he said, justice was about dealing with the system, way of life, and philosophy that produced the murderers.

I think that what both Dr. King and Giordano are saying is that in our quest for punishment of the perpetrators, we can often feel a mistaken sense of vindication that justice has been done and move on. When in reality, we're simply perpetuating what Gandhi so eloquently suggested..."an eye for an eye leaves the whole world blind." Eventually, if we want real justice, we have to do the hard work of looking at ourselves and our commitment to changing the systems that led to the crime.

This is why, in the aftermath of Newtown, I felt so strongly about not buying in to LaPierre's worldview of simply referring to Adam Lanza as a "monster." If LaPierre is right, justice simply requires us to punish the Lanza's of the world and do what we can to protect ourselves from other monsters. In contrast, President Obama spoke to the kind of justice Dr. King was talking about.


It comes as a shock at a certain point where you realize no matter how much you love these kids, you can’t do it by yourself, that this job of keeping our children safe and teaching them well is something we can only do together, with the help of friends and neighbors, the help of a community and the help of a nation.

And in that way we come to realize that we bear responsibility for every child, because we’re counting on everybody else to help look after ours, that we’re all parents, that they are all our children.

This is our first task, caring for our children. It’s our first job. If we don’t get that right, we don’t get anything right. That’s how, as a society, we will be judged.

I don't know if this is the kind of justice that can be captured by a legal system. What I do know is that it has been better served by things like truth and reconciliation commissions and the restorative (rather than retributive) justice systems that are being developed all over the world.

I'd simply caution liberals who embrace our current retributive criminal justice system as somehow the definition of what it means to implement justice (whether it be about dealing with torture, financial crimes, murder or rape). It will never be capable of bringing about Dr. King's dream of justice rolling down like waters.
Posted by Nancy LeTourneau