As regular readers here know, I've been talking for awhile now about how what we're witnessing is the white male patriarchy in its death throes. Yesterday 5 Justices on the Supreme Court were the latest to lash out when they basically issued a ruling that guts the Voting Rights Act.

What I've also been suggesting is that we are in the midst of a third wave of a movement to remedy this country's original sin of slavery and racism. Of course the first was the Civil War that ended slavery and the second was the Civil Rights Movement of the 1950's and 60's that ended Jim Crow. In both of those movements white people gave African Americans legal standing. Over the course of the last 50 years, they've used those legal rights to raise themselves up. The challenge white people are facing today is that it is finally time to look African Americans (and other people of color) in the eye - face to face as equals. And even occasionally see them as our leaders. That's not going down real well. And so the dying beast is lashing out.

All of that came together in this fascinating video by Dr. William Barber II, President of the NC NAACP. I know most people won't take the time to listen to a 7 1/2 minute video. But you need to watch this and learn how what is happening RIGHT NOW is informed by our history.

In Rev. Dr. Barber's view, we are currently going through the third reconstruction. The first Reconstruction took place after the Civil War. Fusion politics — a governing coalition including Lincoln Republicans, freedmen and former slaves, and populists — made it possible for former slaves to become business, community, and political leaders. But fusion politics was snuffed out by a violent backlash, and replaced by Jim Crow laws that blocked African Americans from voting through poll taxes, impossible "tests," and terrorism.

In the 1960s, there was another attempt at reconstruction, better known as the Civil Rights Movement. The progress we made was met with another violent backlash, culminating in the assassinations of Martin Luther King, Jr. and Robert F. Kennedy in 1968.

Rev. Dr. Barber identifies the possibility of a third reconstruction, one that could actually succeed, with the launch of Barack Obama's campaign for president in 2008. Once again, this attempt at fusion politics has been met with a hateful backlash. The backlash against integration, equality, and trans-racial governing coalitions has, in all three instances, included attacks on voting rights of African Americans and other minorities. Rev. Barber believes that change is inevitable because of demographic shifts in America and the effectiveness of fusion politics.

Last night we saw a wonderful example of what fusion politics looks like in - of all places - the Texas legislature. Senator Wendy Davis - who owes her seat to a VRA Section 5 challenge - launched a real filibuster to stop a bill that would have stripped most women in Texas of their constitutional right to have an abortion. After standing in the senate well for hours without being able to sit or eat or drink, buoyed only by the crowds that had gathered to cheer her on, she put on a back brace - with an assist from a friend...Senator Rodney Ellis. Here's fusion politics in picture form folks. 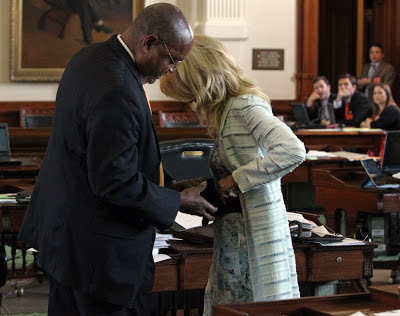 That "assist" was against the rules of the filibuster - according to the Republicans in charge. It was one of "three strikes" against Davis that finally ended the filibuster. But in the remaining minutes of the session, the gallery crowd had a little fusion politics to play as well. They shouted until the clock ran out and defeated the bill.

For quite a while now President Obama has been trying to light a fire under us - telling us that we need to engage as citizens in this democracy. I'd say its time we started watching the good people of Texas and the folks participating in North Carolina's Moral Monday movement. As the song says..."There's something happening here. What it is ain't exactly clear."