I'm not going to recount the whole hysterical drama that unfolded last night as the story about Glenn Greenwald's partner being detained at the London airport unfolded. Bob Cesca has done a great job of breaking it down.

But this whole story about Edward Snowden and his handlers ignites my sometimes dormant "recovering therapist" mode and so I find myself considering Greenwald's challenge as the public mouthpiece of the handlers. That challenge, as I see it, is to maintain their role as merely victims of the big bad surveillance state while simultaneously aggrandizing their role in uncovering the "story of the century." Give the guy some chops...he's pretty good at it.

The first ingredient in pulling this off is to hype the hell out of stories about stuff most of us knew already. They did this by using documents Snowden had stolen while working as a contractor of NSA. So now we don't just know that NSA collects metadata on our telephone calls, we get to see one of the warrants issued by FISA to do so. And we don't just know that NSA surveils foreign targets, we get to see documents that describe the actual programs they use to do so (PRISM and XKEYSCORE).

All of this reignited a conversation we'd had years ago about government surveillance post 9/11. Perhaps that's a good thing. From other releases of information (from both Snowden and the government), we now know that getting access to the phone call content for Americans requires a warrant and that via audits the NSA has compliance issues on 0.001% of its queries.

But you only know that kind of thing if you've followed these stories through for a few days. Greenwald's job is to hype the hell out of each disclosure and pretend that something REALLY BIG is happening before you get the rest of the information. He does that well by not actually reporting - but by telling you only the information he wants you to hear (lies of omission).

The bigger challenge for Greenwald though is actually the other part of his job - to cast he and his partners as victims while they're pulling off all this hysteria. The story about his partner Miranda is a perfect example.

Glenn's version of that story casts Miranda as an innocent traveler who was besieged by the big bad authorities simply because he is Glenn's partner. And he vows to "fight on" against these horrible abuses of power. Do you see how the stage is set for the government as the bad actor and Greenwald, et al as the reactive victims in the situation?

Of course nowhere in his account is it mentioned that this whole drama started when Edward Snowden stole classified government documents. Or that Miranda was traveling at the Guardian's expense to transfer those documents between Poitras and Greenwald. Its all simply a matter of the government's attempt to intimidate these poor innocent people.

Finally, as I said yesterday, all of this totally ignores the fact that Glenn's partner in crime - Julian Assange - had just issued a blackmail threat to the government the day before all this happened.

On a couple of occasions here I've talked about the drama triangle as a mode of communication. It posits that unhealthy relationships are often characterized by traveling around the triangle to assume various roles as well as see other actors playing one of them. 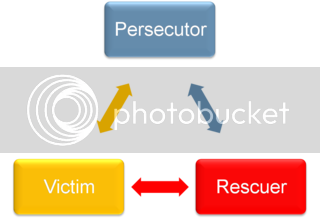 This is the source of the "drama" that we see emanating from Greenwald. In its current iteration, he (and Miranda as well as all the other handlers) are both the victim of the big bad persecutor (government) as well as those that are out to rescue all of us from said persecutor. Maintaining that conflagration means denying that they have any agency in the events that are currently underway.

Trouble is...that's a totally powerless position to be in. So when the time comes to take credit for these "bombshells," Greenwald needs to flip the whole thing and pretend like he (and the other handlers) hold the key to toppling the entire government (shifting into the role of persecutor).

"Snowden has enough information to cause harm to the U.S. government in a single minute than any other person has ever had," Greenwald said in an interview in Rio de Janeiro with the Argentinean daily La Nacion.

"The U.S. government should be on its knees every day begging that nothing happen to Snowden, because if something does happen to him, all the information will be revealed and it could be its worst nightmare."

If your head is spinning now from all that, just remember - that's what communicating with someone who employs the drama triangle will do to you.

If we know nothing else these days - its that our media loves a drama. And right now, Greenwald's challenge is to give them one. I'm sorry to say that even folks like Steve Benen are buying it.
at August 19, 2013