Reflections on the power of "we"

When I hear constant cries about "Obama should do ________?" it strikes me that too many of us have forgotten the meaning of "we" in the slogan "Yes We Can!"

As I watch and listen to President Obama, what I've heard as his one overriding message is that he wants us to recognize the power of "we." For example, his entire speech at the 2012 Democratic Convention was dedicated to the idea of citizenship. And yesterday in honor of the 1963 March on Washington, he took up that theme again.


The March on Washington teaches us that we are not trapped by the mistakes of history; that we are masters of our fate. But it also teaches us that the promise of this nation will only be kept when we work together. We’ll have to reignite the embers of empathy and fellow feeling, the coalition of conscience that found expression in this place 50 years ago...

America, I know the road will be long, but I know we can get there. Yes, we will stumble, but I know we’ll get back up. That’s how a movement happens. That’s how history bends. That's how when somebody is faint of heart, somebody else brings them along and says, come on, we’re marching...

Everyone who realizes what those glorious patriots knew on that day -- that change does not come from Washington, but to Washington; that change has always been built on our willingness, We The People, to take on the mantle of citizenship -- you are marching.

And that’s the lesson of our past. That's the promise of tomorrow -- that in the face of impossible odds, people who love their country can change it. That when millions of Americans of every race and every region, every faith and every station, can join together in a spirit of brotherhood, then those mountains will be made low, and those rough places will be made plain, and those crooked places, they straighten out towards grace, and we will vindicate the faith of those who sacrificed so much and live up to the true meaning of our creed, as one nation, under God, indivisible, with liberty and justice for all.

As much as we all want to make this about President Obama, he keeps pointing the finger back at us - at the power of "we." 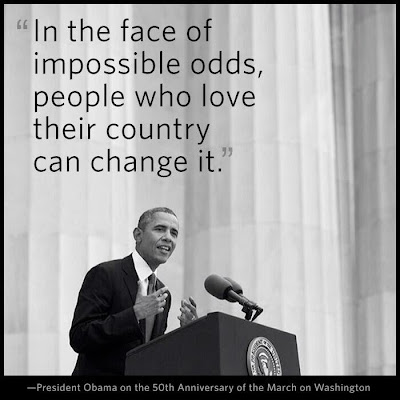 P.S. That's just what John Favreau was talking about yesterday too.

But the president has always been careful to say that no one individual can change Washington, be it the most powerful politician on Earth or the most inspiring preacher known to man. Change—real change—requires a movement, and building a movement requires time. It requires the sustained commitment, courage, passion, and participation of millions of ordinary citizens...

The perpetual coziness and close proximity to power, money, and the blood sport of politics may never position this city and all its dysfunction at the leading edge of a great movement for sweeping change. But as citizens, we always have the ability to build such a movement that forces Washington to respond. In fact, we are expected to.