President Obama: Harnessing the power of big business for change 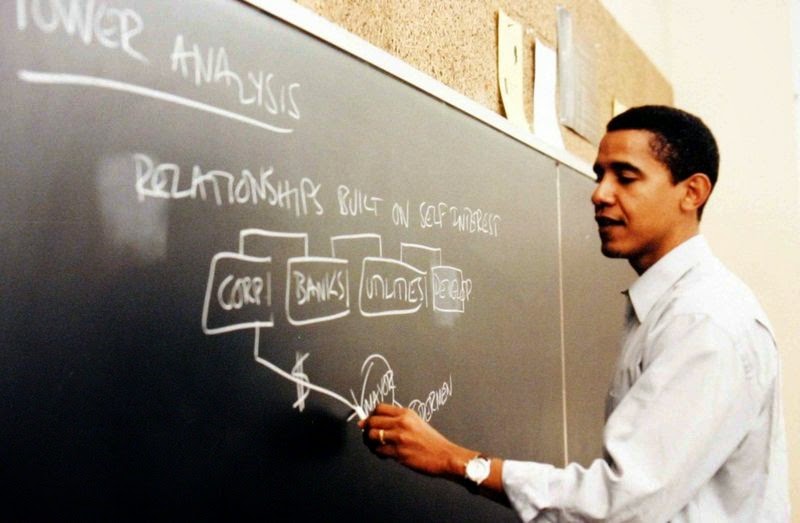 I've written before about how President Obama's time as a community organizer and his understanding of power relations informs his foreign policy and the development of the Obama Doctrine. See if you can connect those dots with why Max Fisher says his strategy of letting Putin hang himself is working.


Most of this is economic. Russia's self-imposed economic problems started pretty quickly after its annexation of Crimea in March and have kept up. Whether or not American or European governments sanction Russia's broader economy, the global investment community has a mind of its own, and they seem to have decided that Russia's behavior has made it a risky place to put money. So risky that they're pulling more money out.

A lot of that may have come from the targeted sanctions that Obama pushed for against individual Russian leaders and oligarchs. Those targeted sanctions did not themselves do much damage to the Russian economy. But, along with Russia's erratic behavior in Ukraine and the lack of clarity as to whether Europe and the US could impose broader sanctions, it appears to have been enough to scare off global investors — the big, faceless, placeless mass of people and banks who have done tremendous damage to Putin's Russia, nudged along by the US and by Putin himself...

The lesson that Putin is learning is that Russia depends on the global economy, whether it likes it or not, and the global economy doesn't like it when you go invading other countries and tempting the richest nations in the world to maybe consider sanctioning you. This is actually a significant change for Russia, which at the height of its Soviet power was not integrated into the global economy and so didn't have to worry about things like investor sentiment. But now it is and it does.

What's cool about this is that it theoretically could apply to lots of other possible acts of international aggression around the world. This is something that economists and political scientists have been predicting since World War One: that integrating all the national economies into the global economy wouldn't just make all of us richer; it would make war more economically painful for the people starting it and thus less likely to happen.

As liberals we are often sucked into arguments about the evils of a globalized economy and we are certainly quick to demonize the "global investment community." But what President Obama saw is that they have power - and that can be wielded for good as well as evil. To harness that power against Russia's incursions into the Ukraine meant coalescing the global community in condemnation and focusing efforts on an economic rather than a military response. The hawks screamed "weak," but the investment community saw the writing on the wall - in other words - they acted to preserve their own self-interests.

Engaging the power of the corporate/investment community for change is a strategy President Obama has implemented on more than one occasion domestically as well. For example, in advocating for single payer, liberals called for an end to private health insurers. But with Obamacare, the President co-opted them into transforming their practices in a way that lines their interests up with those of the American people.

In 2011 President Obama gave a speech to the U.S. Chamber of Commerce. In it he laid out a challenge.

We have faced hard times before. We have faced moments of tumult and change before. We know what to do. We know how to succeed. We are Americans. And as we have throughout our history, I have every confidence that we will rise to this occasion; that we can come together, that we can adapt and thrive in a changing economy. And we need look no further than the innovative companies in this room. If we can harness your potential and the potential of the people all across our country, there will be no stopping us.

Harnessing that potential is a big part of this President's most current strategy to deal with a grid-locked Congress - what some have called his "pen and phone" strategy.


“I’ve got a pen, and I’ve got a phone,” he said at his first Cabinet meeting of the year. Outlining the strategy, Obama said he plans to use his pen to sign executive actions and his phone to convene outside groups in support of his agenda if Congress proves unable or unwilling to act on his priorities.

For example, while President Obama pressures Congress to raise the minimum wage, he is also working with businesses to do so on their own and spending a lot of time highlighting successful companies that pay a living wage. We also see this with his work to engage corporate America in expanding access to broadband and even his "Brother's Keeper" initiative.

Not all of the power for change rests with Congress. In ways both here and abroad, President Obama is showing that harnessing the power of big business is also a way to address our challenges. That's how an effective community organizer thinks. It's fascinating to watch this President put that into action.
at May 18, 2014