The latest gambit the Republicans have launched to challenge the legitimacy of Barack Obama's presidency was announced yesterday when Speaker Boehner said the House will sue him for "not faithfully executing the laws passed by Congress."


At its root is the idea that Barack Obama's presidency is inherently illegitimate, and whatever he does in that office must be illegal, or nearly so.

In reading about this today, I'm not finding any liberals or Democrats who are taking this move seriously. Even if Boehner can fill in the specific charges he left out of yesterday's announcement, no one thinks anything will come of this until President Obama is long gone from office. In the end, this is about the fact that the tools Republicans were planning to use to fire up their base for the November midterms (Obamacare and Benghazi) have been effectively de-fanged. So this is their alternative.

But there is a message in all this that we shouldn't completely ignore. Dana Milbank nails it.


But the real problem with the lawsuit approach is that it misunderstands the cause of the problem: congressional dysfunction. Lawmakers, hamstrung by disagreement, have created a power vacuum, and presidents have stepped in to fill it. The solution is not to sue, but to legislate, which means to compromise — and this is something Boehner’s troops have been unwilling to do.

The truth is that we DO have a constitutional crisis. Its just not the one the Republicans are embracing. Jonathan Capehart identifies the origins. He points to the reporting of Michael Grunwald on Republican plans developed in January 2009 to obstruct anything President Obama tried to do.


Biden says that during the transition, he was warned not to expect any cooperation on many votes. “I spoke to seven different Republican Senators, who said, `Joe, I’m not going to be able to help you on anything,’ he recalls. His informants said McConnell had demanded unified resistance. “The way it was characterized to me was: `For the next two years, we can’t let you succeed in anything. That’s our ticket to coming back,’” Biden says.

The vice president says he hasn’t even told Obama who his sources were, but Bob Bennett of Utah and Arlen Specter of Pennsylvania both confirmed they had conversations with Biden along these lines.

Initially Republicans were able to accomplish this by requiring a super-majority of 60 votes on anything to pass the Senate. But when they gained control of the House in the 2010 midterms, that meant not only the gridlock of obstruction, but hostage-taking over the debt ceiling that led to the first downgrading of our credit rating in the country's history.

I recount that story because since then the Republican leadership has had a problem on their hands. The lunatics in Congress were so emboldened by these moves that they didn't know when to stop. Boehner hasn't been able to craft a coalition big enough (absent the few times he's been willing to work with Democrats) to do much of anything. They even shut the government down against his wishes in a failed attempt to repeal Obamacare. And so, in the same news conference that he announced the law suit against President Obama, he had this to say about the prospects of anything happening in Congress.

How about legislation on the Export-Import bank? “We are just going to have to sort our way through this.” But surely Boehner has a view? “No, I’m not going to answer the question. You know, you’ve tried to do this on immigration for the last two years. . . . I want to get our members to a place where they are comfortable, whatever that is.” As for what to do about the flood of children emigrating north from Central America, Boehner said that he named a “working group” that eventually will “suggest to the administration things that we think can be done.”

Is it any wonder that the president takes executive action in response to such legislative inaction?

If Americans want anything done on climate change, immigration reform, gun violence, the economy or anything else, its not going to be coming from Congress as long as Boehner feels beholden to the teapublicans. Its obvious by now that he is incapable of getting his "members to a place where they are comfortable" with much of anything.

For over 4 years, President Obama patiently attempted to reach out to Republicans. 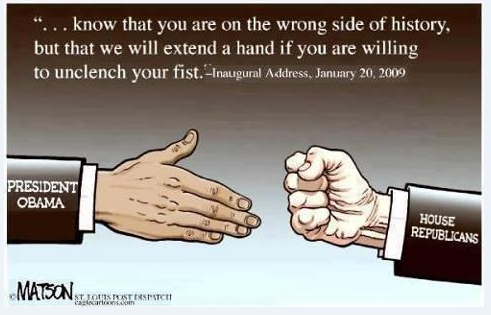 The refusal by Republicans to unclench their fist has sent them directly into the arms of their most extremist base. Now they are immobilized. That is the constitutional crisis we are experiencing.