Over the last six years, we've seen challenges to the legitimacy of Barack Obama's presidency take the form of demands to see his birth certificate, threats to blow up the global economy if he doesn't comply with Republican demands, and a government shutdown with this as an accompanying visual. 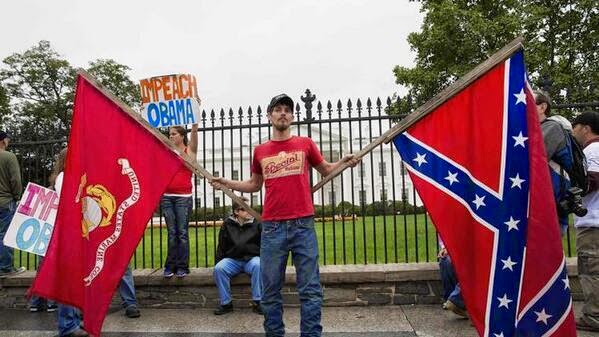 The latest craze has been to call the President "lawless."

And first-term Rep. Randy Weber (R-Tex.) amped up the rhetoric an ugly notch, with pre-State of the Union tweets — from the House floor, no less — denouncing Obama as “Kommandant-In-Chief” and a “Socialist dictator.”

And now George Will has joined the chorus with a column titled Stopping a Lawless President. The means Will is advocating to do so would be for the Republican-led House of Representatives to challenge President Obama in court for his failure to adequately implement Obamacare. This is one of those times that I'm tempted to echo the President's words and simply say, "Please proceed, Mr. Speaker." The idea that Republicans would mount a constitutional challenge to the President's implementation of a law that they were trying to sabotage and/or repeal would present an interesting spectacle.

But that ignores the fact that - especially in our polarized political climate - this kind of talk is dangerous. I hope I don't have to lay out why. I'll simply say that promoting the idea of a "lawless" president in the minds of those who are already considering "second amendment remedies" is a recipe for disaster.  While establishment Republicans attempt to calm the fires they ignited with their radical fringe back in 2010, this kind of rhetoric simply throws gasoline on the flames.

One way to calm the waters is to provide some actual facts and historical perspective. For example, where does Obama fit on the spectrum of presidential power-grabbing?


Benjamin Ginsberg, co-author of “Presidential Power: Unchecked and Unbalanced,” is, as that title suggests, a fierce critic of presidential overreach. But he places Obama on the mild end of such abuses.

“There has been an onward march toward presidential unilateralism,” Ginsberg told me. “Obama has been the least aggressive, least unilateral, of our recent presidents.”

By contrast, University of Chicago political scientist William Howell, author of “Thinking About the Presidency: The Primacy of Power,” is less wary of presidential muscle-flexing. Yet he sees Obama’s behavior as largely in line with that of his predecessors.

For those who simply dismiss historians, perhaps some actual data would be helpful. Here is a chart showing the number of executive orders presidents have signed per days in office. 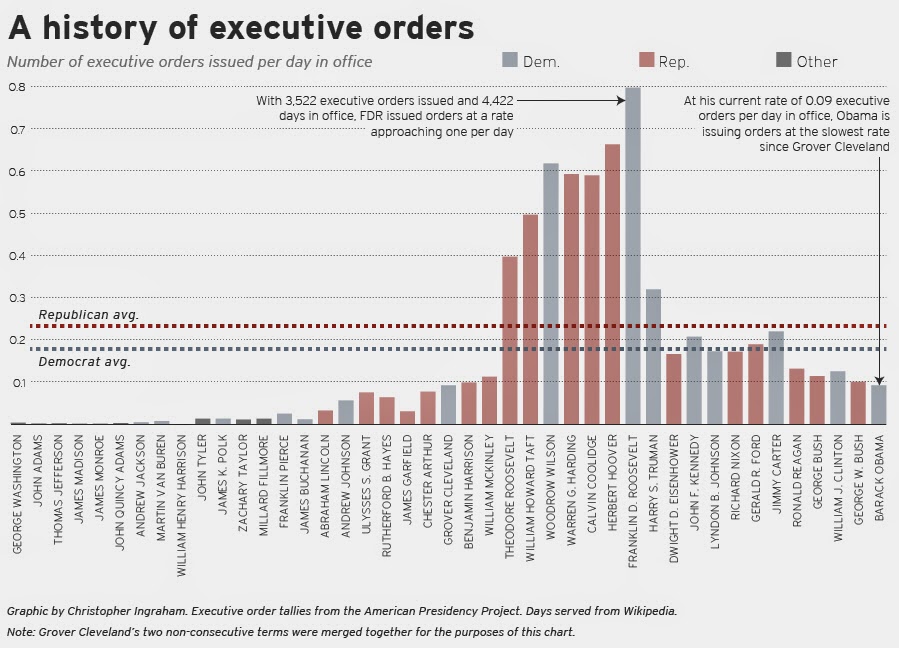 Beyond the data, the real story here is that normally a political party that is out of power attempts to get back into power by crafting an agenda that appeals to voters. But since the disasters in both domestic and foreign policy that culminated during the Bush/Cheney administration, Republicans have abandoned the idea of actually governing and embraced a post-policy agenda. Rather than challenge President Obama and the Democrats with alternative policies, they have committed to obstruction, scandal-mania, and attempts to de-legitimize Obama's presidency. That does not bode well for democracy. But I suspect that the only way to stop them is to ensure that such a strategy is not effective. Our chance to do that comes this November.
Posted by Nancy LeTourneau