How my grandmother learned to be racist

My maternal grandmother was raised in Kentucky. She was a church-going woman with basically a good heart. And yet as a child, I remember her saying things like, "When a chigger becomes a chigero, a n*gger will become a negro." How does one reconcile that?

Peter Smagorinsky provided some insight that helps answer that question. He recently ran across a 1906 elementary school textbook titled Frye's First Steps in Geography that contained things like a chapter explaining the world's five racial groups. Included was a picture of the "ideal head." 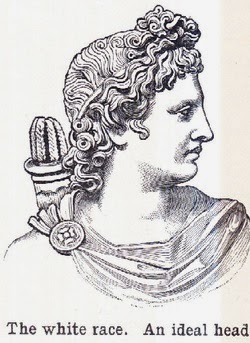 Smagornisky goes on to summarize:

According to this textbook, the white race is the most advanced in the world. Most other races, schoolchildren were taught, tended to have a “savage” character, living in remote areas without industry and Western-style education.

This is the kind of thing my "good-hearted" grandmother would have learned when she was in elementary school.

I grew up pretty blind to how all of this affected me until a few years ago when I watched the series Race: The Power of an Illusion. The film documents that, beginning during the years of slavery in this country, many of our most renowned scientists (i.e., Samuel Morton) devoted themselves to proving that dark-skinned people were inferior. It was a classic case of science being used to bolster ideology. When a country incorporates slavery based on race and its founding documents state categorically that "all men are created equal," it becomes necessary to find a scientific basis to exclude black (and brown) people from that "all."

And so for well over 100 years, children in this country were taught scientific racism. Its more recent manifestation can been seen in Charles Murray's The Bell Curve, which posits that African Americans have lower intelligence than white people.

Of course we now know that there is no science to the construct of race. That's why the documentary calls it an "illusion." But that doesn't change the fact that these notions have been embedded in both our institutions and our psyches. To finally rid ourselves of them requires introspection and examination. For people who haven't begun that journey, images like this one ignite all kinds of unconscious triggers that have been passed on for generations.