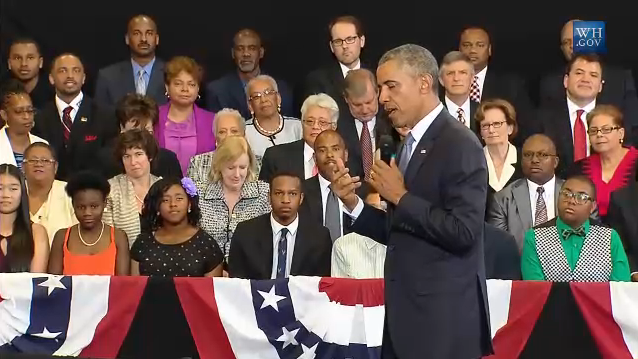 I read Barack Obama's Dreams From My Father just after his speech to the 2004 Democratic Convention. At the time a lot of people were suggesting that he could be the country's first African American president. But not many folks thought that would happen in four short years - I certainly didn't.

What seemed important to me about the book at the time was that it was one young Black man's search to find his own identity. While Obama's journey was unique in its particulars, it is a road that most of us have to traverse at some point if we are interested in something more than simply following the herd.

I specifically remember how Obama described his teenage years and his attempts to "try on" various identities to see if they fit. At one point he considered Malcolm X and the Nation of Islam. But that was before Malcolm's hajj experience when he was still preaching a rejection of the white race. The young Barack considered what that path meant for his relationship with his white mother and grandparents - not to mention the white half of himself - and rejected it.

I say all of this because not many of us go through such a systematic and conscious journey to find ourselves - especially beginning at such a young age. But I believe that journey is why our 44th President is able to maintain his integrity in a political world that often demands it be abandoned. He eventually found his own North Star and demonstrates a relentless ability to keep that in focus through headwinds that knock an awful lot of other people off course.

And so it was fascinating hearing the President respond to questions at the My Brother's Keeper town hall meeting this week. One young man (in the green shirt and bow tie above) asked him how he copes with other people's judgement of him.


But I do think that as you get older part of what you have to determine is what’s important to you -- who are you, how do you want to live, what are the principles that you abide by, what are the kind of fixed foundations, what’s the North Star that steers you -- so that when things happen that aren't always according to plan, and when you have tough times and when you are struggling, what is it that's going to keep you going and keep your bearings.

And I think through trial and error and mistakes and self-reflection, over time I've sort of figured out who I am and what’s important to me and what I care about. And I try to stay focused on that. And that can come about in a lot of different ways. Some people come at it through their faith and God centers them. And some people come at it through their work and they determine, this is what I think is important in terms of my work. There are different paths to it, but at some point, to be a man or a woman, to be an adult, to be a full-grown person, you have to move beyond just what other people think and you have to make a determination about what do you believe in.

Not just what’s your opinion are any given day -- because folks have opinions about everything, and I change my mind about issues. There are times where I think one way, and then I get more evidence, new information comes in, and I say, oh, maybe I wasn’t right about that, let me rethink this. So there’s nothing wrong with changing your mind. But that's different from losing your sense of who you are and what’s important, or just changing your mind because it's easier or expedient.

And what I try to do is be open-minded to new facts but stay pretty fixed in terms of what I think is important. I think, for example, it is really -- this sounds corny, but I think it's really important to treat other people with kindness. So that's a basic principle that I've got. Now, I've got to translate that sometimes in very abstract ways. All right, well, what does that mean if you’ve got suffering children halfway across the world -- what are my responsibilities to them and how does that translate into policy?

And sometimes I've got tough choices because, on the one hand, I may want to help those children; on the other hand, I've got a bunch of young people I need to help here. And if I want to help those children I may need to, then, deal with bad people who are hurting those kids, but that may involve the United States in the kind of conflicts that ultimately hurt some of our young men and women who I might have to send there. So there are complexities to it. It’s hard. But I don’t lose track of the fact that I think treating somebody with kindness, that’s a core value of mine.

Frankly, that interchange kind of blows my mind. Can you think of a time a POTUS talked this deeply, candidly and authentically about - not only his own personal experience - but what it means to  mature into adulthood (a place an awful lot of adults never reach)? The fact that President Obama could do this unscripted means its a process he has reflected on quite a bit.