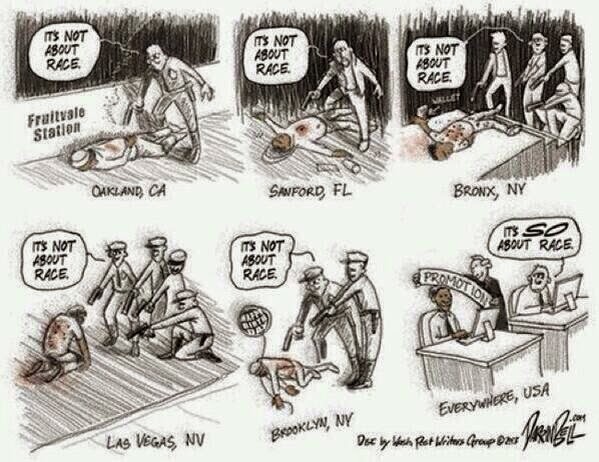 On a more hopeful front, Josh Marshall published this comment from a reader:

It's incredibly unfair that it worked out this way but I think the historical take of the biggest success of the Obama presidency will be this.

As a white, suburban, middle++ aged liberal, I saw the run up to his first election as proof of what I believed for a long time - we were in a post-racial world where the only thing that was holding individuals of color back was a willingness to do the hard work that the rest of us were doing to get ahead.

The re-surfacing of the hidden racism that had become invisible to me was (and is) worldview shattering. The breadth and depth and virulence of both institutional and individual racism is so enormous that I have a hard time coming to grips with it. I'm entirely embarrassed by my pre-Obama beliefs and am still trying to figure out what I can do to move from being part of the problem and becoming part of the solution.

While discussing Ferguson with folks who fall in to the "don't think there's any racism" category, I'm seeing a shift. Events like this, and the pro-protester media coverage seems to be chipping away at the middle. More people are starting to see the world like it really is.

Looping back to my hypothesis, I suspect that without an Obama presidency, the lens through which we view the current events would have been much less sympathetic to the protesters.