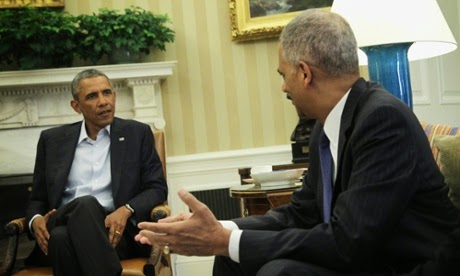 Yesterday President Obama once again talked about the shooting of Michael Brown and subsequent events in Ferguson. Like clockwork, he got criticized from the right for "racializing" the situation and from the left for not being bold enough in talking about the racial dynamics. Same story, eighty-second verse.

What I find interesting is that this time around, we're seeing some journalists attempt to explain the President's measured response to his critics on the left. Ezra Klein jumped into those waters as did Christi Parsons and Kathleen Hennessy at the LA Times. Both articles make claims that President Obama has learned from "mistakes" in the past and that he has changed his approach to dealing with this issue. I suspect there there is an element of truth to that. But overall, his response seems to fit perfectly into what I have always seen as "the Obama Way."

Klein goes on at length about candidate Obama's speech on race. He sees it in high contrast to the President's remarks about Ferguson. But as many pundits have done with the 2008 speech, he totally overlooks this section.


Most working- and middle-class white Americans don't feel that they have been particularly privileged by their race. Their experience is the immigrant experience - as far as they're concerned, no one's handed them anything, they've built it from scratch. They've worked hard all their lives, many times only to see their jobs shipped overseas or their pension dumped after a lifetime of labor. They are anxious about their futures, and feel their dreams slipping away; in an era of stagnant wages and global competition, opportunity comes to be seen as a zero sum game, in which your dreams come at my expense. So when they are told to bus their children to a school across town; when they hear that an African American is getting an advantage in landing a good job or a spot in a good college because of an injustice that they themselves never committed; when they're told that their fears about crime in urban neighborhoods are somehow prejudiced, resentment builds over time.

That was candidate Obama empathizing with the anger that fuels white racism. This is a man who has an extremely developed set of mirror neurons and always seeks to view a conflict from the perspective of his opponents. Remember...in 2006 he said that we were required to see the world through George Bush's eyes. That doesn't mean we agree with him - but we understand his perspective. For Barack Obama, that has always applied to racial conflicts too. His remarks on Ferguson carry on that theme.

Pasons and Hennessy point out that President Obama spoke very pointedly about race during the Trayvon Martin situation. But it is crucial to note that he did so AFTER the Zimmerman verdict was announced. I remember some of the same critics being just as angry when he didn't engage initially about Trayvon Martin's death. Yesterday the President was pretty clear about why:


I have to be very careful about not prejudging these events before investigations are completed because ... the DOJ works for me. When they're conducting an investigation, I've got to make sure that I don't look like I'm putting my thumb on the scales one way or the other.

In addition to that, it has never been the Obama Way to enter into a conflict with strident remarks. When passions are high - he always takes his time to think through the situation and focus on solutions. We've seen this happen over and over and over again during his presidency. Its what drives Maureen Dowd crazy (LOL). At these times its important to watch what the President is DOING more than what he is saying. NAACP President Cornell William Brooks nailed it in regards to the situation in Ferguson.


"But his actions speak volumes," Brooks said. "The prose of his conduct and decisions outweigh the poetry of any press release."

I really love how David Swerdlick put it.


...although there are a lot of different voices that can underscore the racial injustice that surrounds Ferguson and the killing of Michael Brown, there’s only one person who can direct FBI resources and order the Justice Department to investigate a civil rights violation: Obama. And I’d rather see someone who does understand black anger fulfilling that role rather than focusing on making speeches.

Finally, I'd point out what President Obama said during his remarks following the Zimmerman verdict.


There has been talk about should we convene a conversation on race. I haven't seen that be particularly productive when politicians try to organize conversations. They end up being stilted and politicized, and folks are locked into the positions they already have.

Here's what I had to say about that at the time:


He didn't seek this job to be a civil rights movement leader. He sought it to be POTUS - and to be the best damn POTUS he could possibly be.

If you want to know what is absolutely driving the white male patriarchy nuts about our first African American president - its that he's succeeding in doing that. Their freak-out is all about the fact that their game of dismissing this black man as a "boy" who is out of his league, is up.

That's the role Barack Obama chose to play in this struggle. It doesn't mean that its the only one that is needed in this country for us to continue on the path to a more perfect union - that requires an "all hands on deck" approach. But the integrity and competence he's bought to the office is an important piece of the puzzle.

I suspect that at some point President Obama will speak more in-depth to what has happened in Ferguson. But it is likely to be when passions subside and there is the possibility for a "teachable moment." Remember, he plays the long game. That's the Obama Way.
at August 19, 2014