The power of "You Belong"

In response to the events in Ferguson, President Obama said this yesterday:


I know that emotions are raw right now in Ferguson and there are certainly passionate differences about what has happened. There are going to be different accounts of how this tragedy occurred. There are going to be differences in terms of what needs to happen going forward. That’s part of our democracy. But let’s remember that we’re all part of one American family. We are united in common values, and that includes belief in equality under the law; a basic respect for public order and the right to peaceful public protest; a reverence for the dignity of every single man, woman and child among us; and the need for accountability when it comes to our government.

The bolded phrase reminds me that for years now he has been talking about empathy and expanding our moral imagination. His focus on that is totally validated by this video about the possibilities of an empathic civilisation. Please take a few minutes to watch this. I promise you won't regret it.


There's a lot to digest. But its a powerful idea to consider that we are soft-wired to be empathetic and that our first drive is to belong. That explains why this writer - who had never been interested in poetry before - was totally hooked by this line from David Whyte the moment I heard it:


It doesn't interest me if there is one God
or many gods.
I want to know if you belong or feel
abandoned.

Its also why the most telling reaction to the election of Barack Obama as President came from Whoopi Goldberg, who said, "I've always thought of myself as an American. But today, for the first time, I feel like I can finally put my suitcase down."

When it comes to what is happening in Ferguson, compare and contrast these two images (top from the local police response on Wednesday and bottom when Capt. Ron Johnson took over last night) on what they say about sending a "you belong" message. 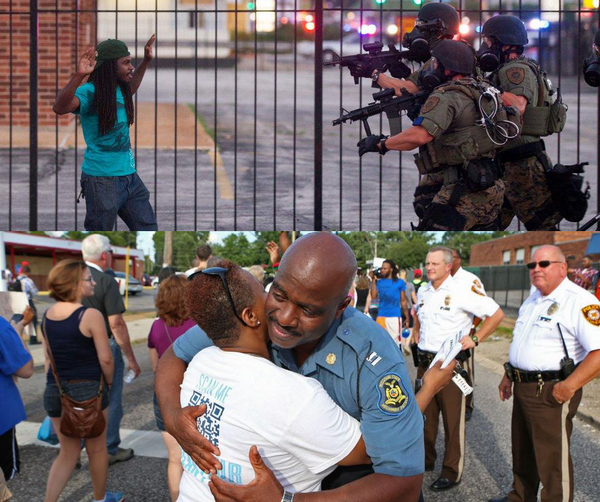 Is it any wonder that last night's response was so much more effective?

Its important to note that in the midst of this highly charged situation,  President Obama talked about being one American family. We all know that being family doesn't mean we all agree. Instead, it means that we tell each other, "no matter what you do or say, you belong with us." That's where empathy gains a foothold.
at August 15, 2014