What it will take to fix law enforcement

What is going on in Ferguson, MO after the killing of Michael Brown should horrify all of us. It is WAY past time that we took a long hard look at what is happening to local law enforcement. And I am very happy to hear that the Department of Justice is doing just that.

About 25 years ago I was surprised and impressed as I watched our local law enforcement embrace the concept of community policing. That whole movement developed far beyond the idea of cops walking the beat. It embraced the reality that in order for cops to do their job - they had to work in partnership with the community, not see them as a threat.

But 9/11 stopped most of that in its tracks. One high ranking officer told me that his work on crime prevention all got put on hold as the department geared up its anti-terrorism efforts. The culmination of that came into view when our local law enforcement geared up for protests at the 2008 Republican convention. It scared the shit out of me! 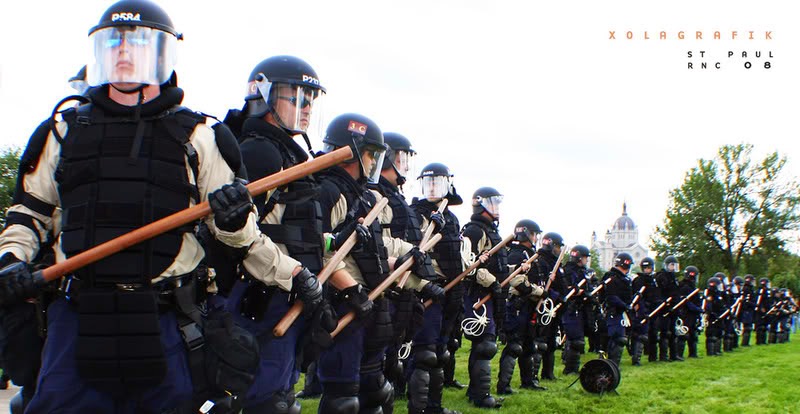 This is what was on display before anything happened. It was nothing but overkill and intimidation...IOW, all about dominance.

Back in the early 1990's a Deputy Chief told me something that has stuck with me for a long time. Please excuse the sexism involved because I think its an important point. He said that the police department would be where it needs to be when over half the officers are women. That's because police work is mostly about negotiation and women tend to be better at that.

I was reminded of that a few days ago while I was listening to a program about changing careers on public radio. One of the people who called in was a cop who said he should have become a farmer like his dad because police work was such a disappointment. He went on to talk about how he expected to be chasing "bad guys," but instead found he spent most of his time mediating and negotiating community conflicts.

To me, that gets to the heart of our problem with law enforcement. We envision it as "good guys vs bad guys" and then recruit people for the job who want to stick it to the "bad guys." Racial sensitivity training is never going to cut it when the problem goes much deeper. Until we get to the place where we see law enforcement as a service working for/with the community and recruit folks who are good at doing that, we won't be able to fix this mess.
Posted by Nancy LeTourneau