I STILL prefer a "no drama" presidency (updated)

Nothing I've read recently captures the current political spin better than this article by Joshua Green titled: Obama Is Too Cool For Crisis Management. Apparently for Green, "crisis management" involves having a president who panders to the emotional needs of the Great American Freak-Out created by Republican fear-mongering and our media's obsession with link bait.

Green dismisses this President's "no drama" response as inadequate.


“He responds in a very rational way, trying to gather facts, rely on the best expert advice, and mobilize the necessary resources,” says David Axelrod, a former White House senior adviser...By all accounts, Obama treats a crisis as an intellectual inquiry and develops his response through an intensely rational process. As former CIA Director Leon Panetta said recently in a TV interview, “He approaches things like a law professor in presenting the logic of his position.”

Six years in, it’s clear that Obama’s presidency is largely about adhering to intellectual rigor—regardless of the public’s emotional needs.

OMG - what a failure!!!! President Obama has a nasty habit of "adhering to intellectual rigor" to actually solve problems "regardless of the public's emotional needs."  Nevermind that those "emotional needs" have been manufactured out of whole cloth. At least Green is able to poke a little fun at this when he quotes someone who reminded us that more people have been married to a Kardashian than have died from Ebola.

Green sees similarities between President Obama's latest response to Ebola and how he handled the Deepwater Horizon oil spill, the chemical weapons attack in Syria, ISIS, and the rollout of healthcare.gov. So let's see...how did those things turn out?


...his record, even on issues where he’s drawn heavy criticism, is often much better than the initial impression would lead one to believe. He may tackle crises in a way that ignores the public mood, yet things generally turn out pretty well in the end. He and his economic team, though deeply unpopular, halted the financial panic and brought about a recovery that’s added jobs for 55 consecutive months. His signature health-care law addressed a slower-moving crisis; while similarly unpopular, it has delivered health insurance to more than 10 million people. Even Deepwater Horizon was nothing like the environmental cataclysm it threatened to become. “It really became a parable of how government can mobilize to solve a big problem,” Axelrod says. And he adds, “Bush didn’t get bin Laden—Obama did.”

While the public is led into panic mode, over and over again this President has a record of solving problems. Perhaps it would be nice to have a Daddy-In-Chief who takes responsibility for addressing the public's emotional needs. But I personally am MUCH more interested in competence.

With that said, I am reminded of the day President Obama identified as the worst of his presidency. It came on December 14, 2012 when 20 beautiful children and 6 adults were gunned down at Sandy Hook Elementary School. It is moments like that when this President has shared our grief and done all he can to console us - both publicly and privately. 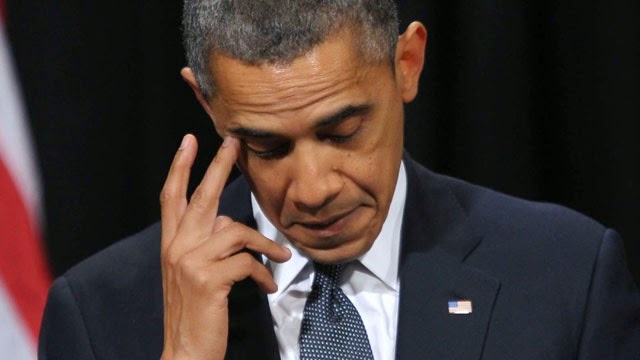 Whether it was manmade disasters like Sandy Hook and the shootings in Tucson/Aurora or natural disasters like the tornados in Joplin and Hurricane Sandy, this President has shown an amazing capacity to identify with and speak to the public's emotional needs. Perhaps - unlike Green - he is able to distinguish between the times those emotions are based in reality and when they are simply panic fueled by those who peddle in fear.

UPDATE: Now go read Matt Yglesias' take down of the Joshua Green article: Journalists don't like Obama's chill temperament, but it's served him well.
at October 24, 2014