Calm, dignified competence as a threat 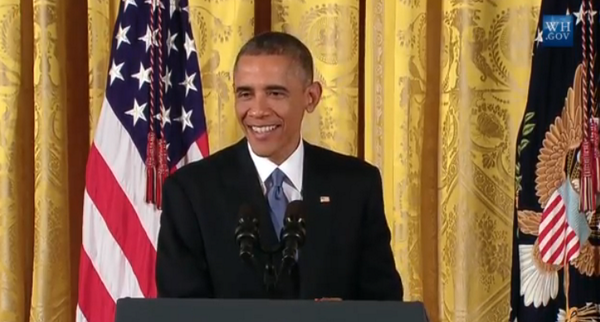 It's been fascinating to watch media pundits respond to President Obama's press conference yesterday. Given that so many of them had advanced the GOP message that this election was all about Obama, they were frustrated that the President did not appear at the podium depressed and contrite for having failed so badly. Instead, he said things like this:


What stands out to me, though, is that the American people sent a message, one that they’ve sent for several elections now. They expect the people they elect to work as hard as they do. They expect us to focus on their ambitions and not ours. They want us to get the job done. All of us in both parties have a responsibility to address that sentiment.

Dana Milbank signals the kind of response he was looking for by suggesting that President Obama wasn't troubled enough by the election results.


Indeed, Tuesday’s returns did not trouble him greatly, he said. “There are times when you’re a politician and you’re disappointed with election results,” he said. “But maybe I’m just getting older. I don’t know. It doesn’t make me mopey.”

In many ways, I think these pundits are just too lazy to dig deep into the many complex reasons for Tuesday's election results. Its so much easier to grab that GOP meme, make it all about Obama and then expect him to be contrite.

But in reading these kinds of accounts, I was reminded of something Jonathan Chait wrote about his reaction to the movie 12 Years a Slave.


Notably, the most horrific torture depicted in 12 Years a Slave is set in motion when the protagonist, Solomon Northup, offers up to his master engineering knowledge he acquired as a free man, thereby showing up his enraged white overseer. It was precisely Northup’s calm, dignified competence in the scene that so enraged his oppressor. The social system embedded within slavery as depicted in the film is one that survived long past the Emancipation Proclamation – the one that resulted in the murder of Emmett Till a century after Northup published his autobiography. It’s a system in which the most unforgivable crime was for an African-American to presume himself an equal to — or, heaven forbid, better than — a white person.

And yes, its a system that survives to this day - even if it is so often hidden from conscious view and buried deep in the reptilian portion of our brains.

The frustration of these pundits was at least partly influenced by their racist need to see this black president knocked down a peg or two. His "calm, dignified competence" in the face of the narrative they had crafted about his defeat enraged them.

While the torture Solomon Northrup endured for challenging this system was more severe under the institution of slavery, I firmly believe that President Obama is calmly and quietly confronting this form of racism every day. From the position of the most powerful person on earth, he is challenging the "unforgivable crime" in our culture of an African American who presumes himself to be "equal to - or, heaven forbid, better than - a white person."
at November 06, 2014